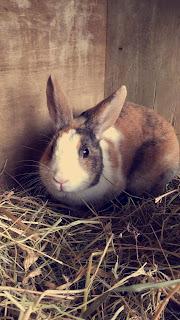 Meet Topsy.
Topsy was handed in to a rescue by someone claiming she was a stray, when her microchip was checked she belonged to the woman who had handed her in.
Topsy originally came from a pet store and was purchased by someone who had done no research into her needs and been given little advice.
If that wasn't enough poor Topsy had snuffles, it was against the other rescues policies to rehome a bunny with snuffles and her foster mum couldn't provide her with enough space so Topsy has come to live with us at Rabbit Residence.