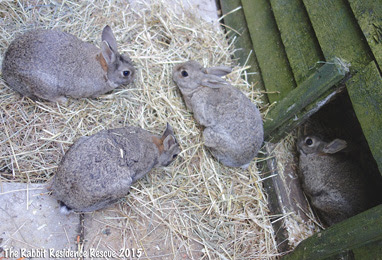 Very sadly, our dear little Goofy has passed away.

Pea, Pod, Cosmos and Goofy were a litter of four wild rabbits found by a grounds worker when their warren was inadvertently destroyed. With their mother either killed in the process or having no chance to find them again, they were taken in and hand reared from tiny babies by the kind grounds worker before being handed over to the Rescue. Two boys and two girls, initially they seemed flighty and were housed in our old barn while we decided what to do with them, but after the stress of moving to the Rescue subsided, it soon became clear that they were not good candidates for release. Not only had three of them become pretty domesticated, but one had also somehow managed to lose their front teeth. And so they became permanent residents.

Despite their domestication, they always maintained a degree of wild behaviours. More than any other rabbits at the Rescue, they would enthusiastically dig deep burrows in their enclosure, dig out if not 100 percent enclosed and ferociously challenge through the mesh fence any rabbit appearing at their perimeter. Despite this, when out to play they would be absolutely good as gold when it came to home time and at the sound of the snack bucket would all race back in for their tea or treats!

Because of their wild energy, they had a fabulous Runaround system built around their shed and run to give more of a warreny feel to their home. After putting it in they seemed to be a lot happier and less mischievous, but the the week the new setup was due to go in was a challenge. Goofy was the one of the four that never completely trusted us humans, so sensing change was afoot, he decided to hide out. It turned out they had constructed a deep underground burrow under their run, having dug down through a tiny gap in the slabs. He stayed hidden for around a week, surfacing only to eat and drink when no humans were around. It was a very stressful time until we caught him outside one day and managed to block off the entrance to their underground tunnels. Fortunately he and his siblings didn't seem to mind once they found the new overground tunnels and extra chambers we put in for them!

Their willingness to attend mealtimes together when the food was delivered varied over time. I suspect it has been part seasonal ("Yeah, whatever, you missed active snackytime, it's naptime now, you know?") and part to do with what strange people were stomping around the Rescue at the time. Sometimes four would appear, sometimes none, or any combination in between. If I didn't see them all at the bowl, I would always seek them out (they would usually be found flaked out sunning themselves in plain sight behind the mesh of some part of their house or other) and hand-feed them a couple of pellets or parsley pieces to make sure they were all OK. Goofy sometimes found this individual attention just a little too much and would usually go sit in a tunnel until I'd moved on, but if the other three rushed to the bowl he would usually follow.

I was at the Rescue Friday afternoon/evening last week, doing a little sweeping, cleaning and dinner. It has been a while since I've seen all four at breakfast (I mostly do mornings and breakfast), so I was delighted when they all appeared for their dinner. Of course, I couldn't resist taking a photo, which is the one you see above, and though it didn't come out all that well it will now be very special to me as my last one of the whole group. In case you hadn't already guessed, that's almost certainly Goofy off to the right eating his pellets inside the shed. It makes me very sad to think I'll never see all four of them together at mealtimes again, but I feel very privileged to have experienced so many mealtimes with Goofy over the years and glad that he allowed me to have that one last one.

Eleanor was feeding everybun yesterday (Monday) evening when she discovered Goofy had passed away. We don't know what the cause was yet, but several of the volunteers have pitched in to pay for a postmortem to be carried out in the next few days, not only for peace of mind but so we can be sure for the other three in case of any infection.

You were a very special and dear little boy who lives in all our hearts. Binky free precious Goofy.

Posted by Bunny-Hugging Volunteer at 21:05