It has not been a good week here at Whisky Mansions. Something is up with our fluffy overlord but I am struggling to figure out what. In the last few days we've had various phases of reduced appetite, confusion, messy poo everywhere, excessive drinking, no drinking, excessive hiding and all sorts out-of-character, not-part-of-the-routine behaviour. He'll be almost normal at one end of the day and by the other he'll be off again.

I have not ruled out diet - he has been eating more grass outside than is usual for him, it may well all stem from the sudden change upsetting his tummy. Several of the other symptoms could be explained by him wanting to lay low thinking that if I get near enough to him to spot something is up he might be packed off to the vets. Well as it happens, he is already booked in for an appointment, so he's out of luck there.

Today's random issue is that he only ate half his dinner. He is a little piglet, this is quite unusual, but sometimes when he is having sensitivity in the nerves in his face he struggles to pick pellets up and gives up. So to establish if it is his appetite, we have a sure fire test - poke a carrot stick in his mouth and see if it quickly disappears. 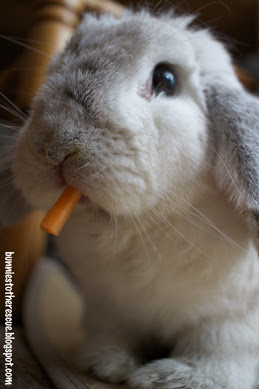 [6 carrot sticks later] Not the appetite then...

Posted by Bunny-Hugging Volunteer at 19:35