I don't know how well this shows up, but here is what my finger looks like today after Samosa tried to bite it off at the Rescue yesterday: 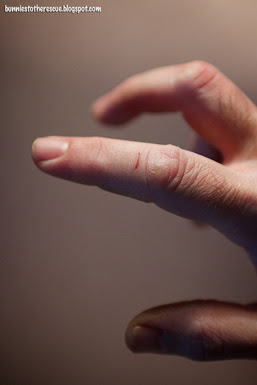 Her teeth went deep into the flesh either side and she yanked at it with some force. At first I thought, what with bunnies having that blind spot immediately in front of their noses, she had meant to snatch the carrot I was holding and make off with it at speed. But then later when I realised she had targeted the very finger I needed to operate my camera, I started to wonder if maybe I'd been targeted under some sort of contract, a 'hit' if you will. All I can say is, I didn't get many photos this week AND....ouch.

Actually, I very nearly didn't make it to the Rescue this week. My dear little sofa-wettener Whisky has not been having a good time of it. At some point last weekend he stopped eating hay, by Monday morning he had stopped eating anything. He was trying, just not succeeding. You could leave him in front of a plate of food, come back 20 minutes later you would find the food still there but spread all over the floor with him desperately trying to pick it up and keep it in his mouth long enough to chew it.

Whisky's vet thinks Whisky is struggling to breath through his nose, which makes it especially difficult while he's eating, his recurring infection seems to have quietly spread to his other side as well as worsening. To try and combat this he is back on antibiotics, back on twice a day nebulising with Ventolin and F10, he also had a few days of syringe feeding. Thankfully he has not gotten any worse in the last week, but not exactly improved much either. At best we are back to how we were last weekend, he can just about eat regularly grated carrot again (for most of the week I had to finely grate it almost into a mush) and regular pellets if I help them into his mouth, but it varies unpredictably, sometimes he can't. He got a bit depressed with the change in routine, especially being back to having syringes stuffed in his mouth, but he has accepted that again so hopefully he will start fighting back at the germs better now that he has cheered up again. Back to the vets for a check-up and more decisions tomorrow. In the meantime I shall accept my place as stuffer-of-snacks... 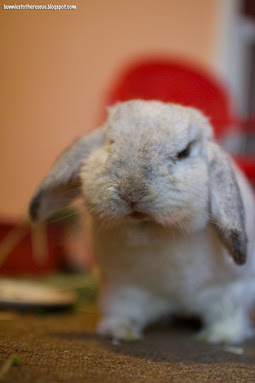 "Speaking of which...get with the stuffing already!"
Posted by Bunny-Hugging Volunteer at 17:39