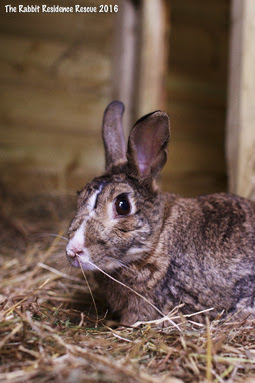 Tansley was a wild-cross rabbit who lived at the Rescue for more than 6 years. His mother was a pet who escaped into the wild, only to return pregnant and her owners did not want the unplanned offspring. The wild rabbit part of Tansley made him practically un-homeable as it made him naturally cautious of people, which tends to put people off. So despite his handsome looks and trendy white nose stripe we knew from the moment he came in that he would most likely stay with us his whole life.

Despite the cautiousness, Tansley was more curious about people than his brother Thistle and would run to the front of his new-arrivals hutch to see what you were doing through the mesh. We couldn't keep them in those hutches too long though - apart from anything else, they channelled their wild energies into destroying the hutches in record time. We arrived at the Rescue one morning to discover one of them had chewed a semicircular hole around the catch that was holding the door closed. Not just mischievous but clever too!

So Tansley and his brother were kept together and moved to a much bigger space where they could burn off their energy. Over time they became more confident, certainly around the volunteers, and you would always see them come racing over for breakfast, though sometimes the racing would be followed by a quick chase and squabble!

All was good with the boys until poor Thistle became sick and suffered recurring head-tilt and other issues. Seeing the constant handling of his brother for medicines made Tansley more wary of people again, though you could generally just about bribe him out with a little parsley!

After Thistle passed away earlier this year it became more difficult to tempt Tansley out, but he did love playing on and eating the grass in their area and it was always a pleasure when you did see him out. Sadly though, very recently his health began to deteriorate and on Thursday we had to say goodbye to him as he left to join his brother at Rainbow Bridge.

You were a very special and individual boy, Tansley, and we loved you for it. Binky free.