The Fun of the Fosters

Today's post is exceptionally late because firstly I broke a long standing tradition and actually went out on a Friday night (to see one of my favourite bands, Martha, play in London) and secondly because I was punished for trying to have a social life with yet another emergency trip across counties to the vets this morning. However, this is just the life of living with rabbits that we expect, I'm not actually grumbling. I should also say though that, this being vet appointment number four in just three weeks (and we already have two more arranged for the next two weeks, even without any more emergencies), these are not turning out to be the low-maintenance foster bunnies that I was hoping for this summer.

Bugsy has had many of her molars removed from multiple jaw bone abscesses as well as having a hole in the side of her head that needs cleaning twice a day. The hole is from a persistent ear abscess and has been deliberately left open to allow it to drain and be cleaned, along with the gunk that oozes into her ear that needs clearing. It is not a pleasant process for either of us. Here is the hole post yucky cleaning process: 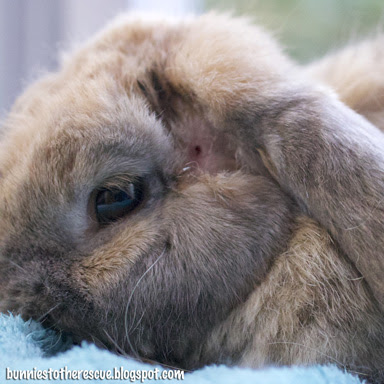 As well as being yucky, the cleaning process is also slightly painful to her as the abscess site is very sore. She is also on four different medicines as of today (it was one when she arrived at my house, then two...) and needing to be groomed of moulting fur twice a day. Bugsy is also not coping well with the heat wave we are having here in the south of England this week. She blames me for everything. So when not cleaning her up, I mostly see her from this side: 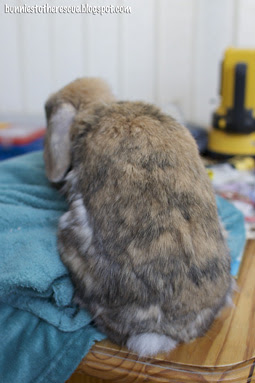 Sprat has no incisors and has had 6 rear molars removed due to abscesses, so like Bugsy needs soft/grated food. He also suffered mysterious weight loss just before he came to stay with me so he has had some veterinary poking and has tests due soon, but regardless he is having a delightful holiday. He doesn't much care what goes on as long as he gets to eat as much as he wants (for the weight gain) and race round the garden at insane speeds with mega-binkies (photos to follow if I can get any). He loves attention and just seeing Sprat coming racing towards me every time he sees me is enough to cheer me up from any of the other stuff. That doesn't mean he is always easy to photograph though - even after three weeks here he is more interested in exploring and entertaining himself than he is in sitting still for picture time: 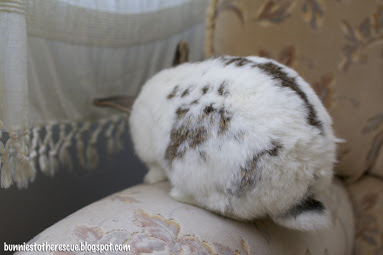 "Woo-hoo! I think I've found somewhere else to play!"

So there you go. Fostering bunnies can be hard work, but it is not without its rewards.

A lot of butts on this blog recently - I'll see if we can't 'turn that around' from tomorrow...

Posted by Bunny-Hugging Volunteer at 21:25