Another theme that Anne McBride talked about at the RWA conference in early July was keeping bunnies’ minds (and bodies) busy, arguing that for both humans and animals not having enough to do leads one to dwell on the negatives in life. She was quite negative about presenting rabbits with their food in a bowl, on the basis that they would usually spend hours foraging and that a portion of food given in a bowl gets gobbled down very quickly. She favours scattering food amongst hay so the bunnies have to forage for it and so find it all more slowly and she was very positive about using interactive feeding devices/puzzles such as the ‘Teach n Treat’ (search YouTube to find examples of this in action) and treat balls.

I’d never bothered with bunny treat balls before as the only design I’d seen had raised carrot shapes on the outside and I’d seen one that a rabbit had chewed all the shapes off….which is exactly what Queen Boo would do! However, after the lecture from Anne I had a scour of the internet for what designs were out there and found a similar design but with the carrots indented and one without any raised shapes and bought two of each (one per bunny so that, in theory, they can’t fight over them).

With a few Science Supreme Selective pellets in them, they were received with great delight, though with varying degrees of persistence depending on the bunny. 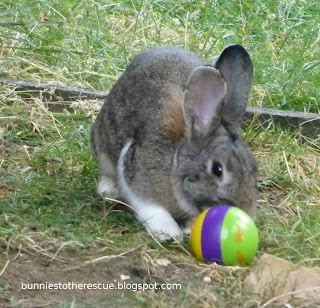 “Um, excuse me hooman, but you seem to have forgotten to open this new pot of snacks…” 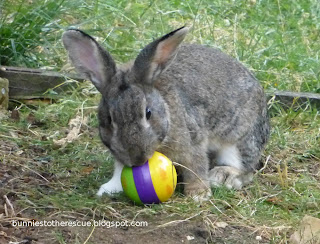 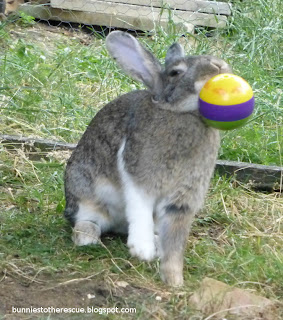 “…if I give it a good enough shake!”
I was actually quite impressed and pleased at how much fun our two more active (less lazy) bunnies have had with them so far. However, to my mind I do see some advantages to serving at least part of their meal in a set location: a) it means I can see that they are enthusiastically eating, lack of which could mean they are ill; and b) a bowl or scattered over the hay is fairly easy access for each bunny regardless of their level of persistence/dexterity and usually means they get an even share of their meal. So I’m not quite ready to give up on bowls entirely and am currently applying a ‘half and half’ strategy (half their pellet portion in the bowl or fed by hand, half in the balls) for the best of both worlds.
Posted by Under-the-thumb Bunny Mum at 06:30