We might have a bit of an unintentional theme developing for Thursdays, what with this week and last weeks photo's, but let's not dwell too much on my ineptitude! Moving on...

One of the reasons we went a bit off schedule yesterday was that on Tuesday I was at the Rescue helping to cover the last day of Caroline's well deserved holiday. I cleaned, I medicated, I fed, I went home and collapsed. I was shattered. (If Eleanor's reading this she is probably now chuckling to herself as I only managed half a day while she was there all week, but still, I'm old, I'm unfit, I'm weak and everything hurts now. Anyway...) So I didn't have a post ready for our usual 06:30GMT.

The other extra job I had the two days I was volunteering during Caroline's holiday was being "The Hay Man". Hay would be delivered to the Rescue, I would deliver it to the hospital at Caroline's house for the volunteers there. I'd not been to the hospital for a while, so this gave me a chance to catch up with some of the elderly and sick bunnies I haven't seen for some time. It also gave me a chance to get some quick snaps of bunnies I don't have decent photographs of.

Which actually gives me an idea for a quick and random photo tip:

If you want to take your bunny photography to the next level, you can achieve really great, professional-looking portraits of your fluffy friends with a basic DSLR and a cheap 50mm prime lens.

That look that's in 90 percent of my photo's, where the bunny's face is all sharp but the background is soft/blurred? (See below) That's pretty much how it's done. It's all about the F numbers. A 50mm prime lens, aperture set to around F2.8 and you can get some really gorgeous shots. For a few hundred quid for a basic or second hand camera body plus under a hundred for the lens and you're away. There are a couple of downsides to this setup however:

DSLRs are not entirely practical in day-to-day non-bunny photography either, since they are a pain to carry around and there are an awful lot of places that ban them to keep professional photographers out (or at least those who haven't paid for the privilege of taking pics they can make money off). But if you want to get more serious about your bunny photography right now, this is a good way to go.

I should probably just throw in a quick aside here, I firmly believe that the high-end compacts are still better bunny cameras, but to get those small F numbers and comparably high picture quality on a compact can end up costing much more. Looking tonight on Amazon, the Sony RX100 III F1.8 compact camera is selling for around 580 quid, whereas you could buy a Canon 700D with a 50mm F1.8 lens for less than that or even a 1200D and the same lens together for less than 360 quid. There are all sorts of reasons why that is not really a fair comparison, and the options are further complicated by some amazing advances in mirrorless cameras lately, like the awesome Sony A6000, but I'm going off topic a bit here and could end up writing pages and pages on this...so let's get back to the bunnies!

So there I am with my DSLR and 50mm lens at the bunny hospital ready to get all portraity. One of the bunnies I don't have any decent pics of is Old Soldier. He's a lovely chap, quite docile and generally friendly to anyone who will stroke his head. Oh, and he is...well...huge. Possibly the largest French Lop I have seen here. He was only at the Rescue main site a few weeks before he moved with his very poorly and regular sized partner Fariyah to Caroline's house (Fariyah had one of her kidneys removed if I remember correctly, she is doing much better now). I guess I should introduce her too, so say hello to Fariyah! 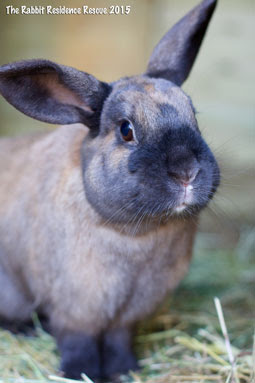 So anyway, like I said, it was also a great chance to get a decent photo of Old Soldier. So I lined up the camera, I moved back a bit, then a bit more, then back until I was pushed up against the side of the pen as far away from him as I could and I took the picture. 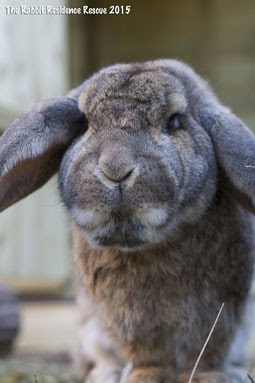 "When you have finished over there, are you coming back for more nose rubs?"

He does possess two complete ears, I can assure you. Like I said, he's huge. Next time I'm going to take my smaller camera and just hope he doesn't eat it.