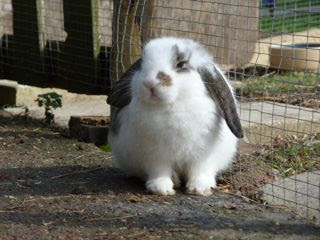 Today was less productive than it could have been. Days like this are not unusual - heavy rain, wind and even warm sunshine are our enemies when working outside. Anyone who has tried throwing wood shavings evenly across a hutch floor in gale force conditions will know what I mean here. But there is one thing outside of the weather that is GUARANTEED to slow every single volunteer as we go about our daily chores. One thing that causes us to drag our feet every time we pass through the yard, to dawdle whenever we are within a few feet of the new arrivals barn. New. Baby. Bunnies. 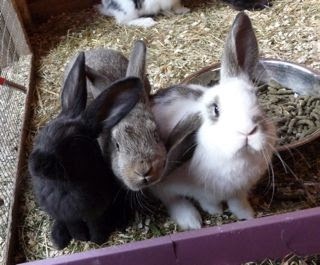 I wonder how many I could fit in my pocket without Caroline noticing...

Posted by Bunny-Hugging Volunteer at 22:08 No comments: 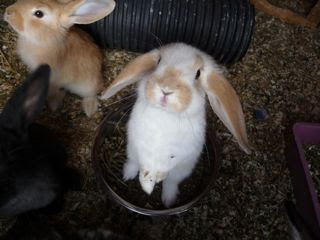 "Yes, yes, just place the food in the bowl, you don't even need to look you've done it a thousand times, just pour it in!" [opens mouth]

Posted by Bunny-Hugging Volunteer at 08:49 No comments:

How clean is your bunny house? 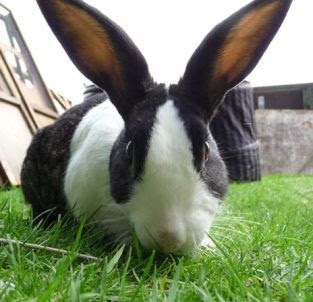 This week I was put in my place by Nestle, an adorable agouti Dutch bunny! As I entered his residence, I knew I was about to receive some serious schooling. “We decided to take a corner each, so there will be some SERIOUS wee-scraping required over, here, here and...here” he seemed to be saying as he darted around me. He took charge of the dustpan – using his paws and mouth to position it in the perfect place to scoop up all the bunny mess. I obviously just wasn’t getting it right. By dashing between the bag and dustpan he made sure that I wasn’t sloppy and all the mess went into the rubbish bag. So helpful! When all the cleaning was done he inspected the corners and nudged me appreciatively: “Not bad for a human, I guess”. After I had bedded up his house he checked that the hay was in the right place, adjusting it to his decorative fancy, then dived into the fresh readi-grass –“munch, munch, munch!!!” He seemed satisfied that I had done a pretty good job… or maybe that was just the readi-grass talking.

It would appear that some scheming has been going on in the New Arrivals Barn. You will recall that several weeks ago I was thwarted in my attempts to take a decent picture of Puzzle Bunny. Well it seems that he found it such a wheeze that he has been passing some advice around his comrades. 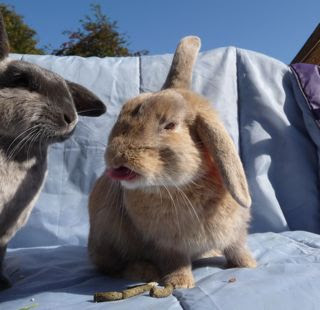 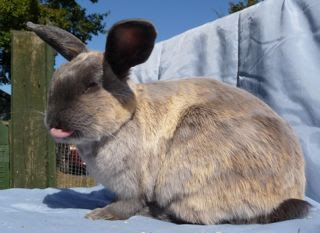 Could this be the start of all-out bunny revolution? Watch this space.

Posted by Bunny-Hugging Volunteer at 22:13 No comments:

I own a house. This is pretty much a necessity for me. When a letting agent asks what your basic requirements are and you start with "Somewhere where it's easy to clean woodshavings and hay from all the floors and surfaces, and where tiny fluffy creatures are welcome to chew everything within two feet of an accessible surface..." it rarely goes well from that point. So I own a house. There are currently six of us living at the property, usually harmoniously. But today, while I was preparing breakfast, someone broke one of the most important of the house rules and I need to figure out who. So let's look at the suspects. 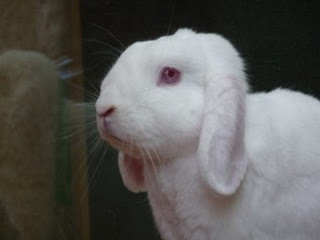 First up is one Mr Santa Bunny. A wiley character this. Take your eye off him for a second and when you turn back he'll be looking straight back at you, eye-level, from atop a bookshelf. (Look down and you will see a pile of anything you had inconsiderately left on the shelves that might have slowed his ascent.) A definite candidate for mischief this one. But now that I think of it, I know for a fact that at the time of the incident he was in the shed diligently throwing everything from inside out on to the lawn. So I guess it wasn't him. 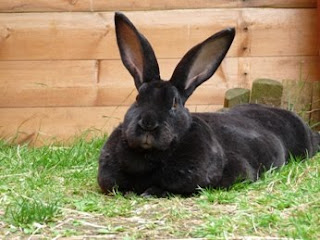 Our next suspect is the huge black lump known as Jemima Bunny. She has a different party trick to Santa - turn your back on her for a second and she will make anything resembling food in a 10 metre radius disappear. Vegetables, leaves, electrical cable. Nothing that will fit in her mouth is safe. But again, now I think of it, at the time of the incident Jemima was in the garden rapidly digging her way to Australia, so I guess she's out too. 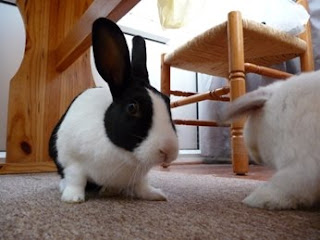 Ahhh, Megan Bunny! My little angel. Sweet, timid and gentle. When she wants something she will politely come and ask for it. Megan was definitely in the vicinity at the time of the incident. She certainly had the opportunity to commit this offence, but not the motive. She loves positive attention and treats and wouldn't risk jeapordizing either. Megan is my little angel and certainly not the rule breaking type. So I don't think it's her. 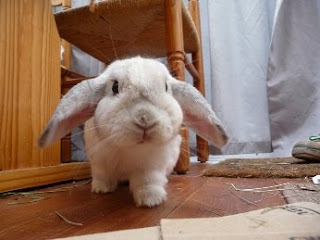 And so we come to Whisky, crazy, crazy Whisky. So crazy but also so very, very cuddly. Imagine if you attached an out-of-control rocket to a teddy bear and you will start to get an idea of what Whisky bunny is like. He hurtles around the place with his cute little ears bouncing and flapping all over as he goes. Then he stops for a bit and does the cutest little bunny stretch-and-yawn you ever did see!!! How could I possibly blame him for anything???!!

Well, if it wasn't me and it wasn't any of these four little rascals, I can only conclude that it must have been the lodger that decided to wee on the lounge floor. Ho hum. Maybe I'll just have to switch to lino and forget about it.

Posted by Bunny-Hugging Volunteer at 18:56 No comments: