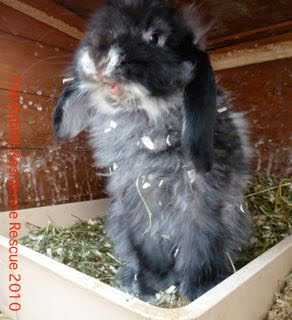 I found this strange creature at the Rescue on Saturday. There's a sign on the hutch. It reads "Smurf - needs grooming". 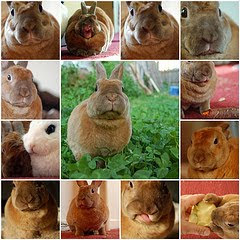 Photo's of Derby by Carly and Art

I have just heard that one of my favourite webstar bunnies, Derby, passed away last week. Derby was a handsome (and often disapproving) mini-rex who featured on CuteOverload a number of times and whose Flickr photostream brought me many moments of happiness.

My thoughts go out to Carly and Art during this sad time along with my heartfelt thanks for sharing his life with us.

Posted by Bunny-Hugging Volunteer at 20:01 No comments:

I couldn't leave you with just a picture of my hand for today's blog - you probably only came here cos there weren't enough cuddleh bunneh pics for you on CuteOverload today, right? So here's a quick picture story of what happened AFTER my encounter with Pat and Bob, but be warned - contact with Rocket Bunny should only be attempted by experienced rescue managers who have spent 14 years developing mad bunny skills. 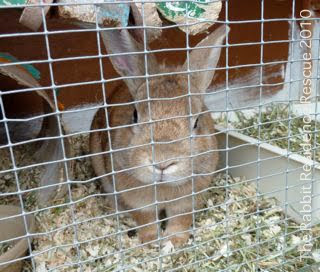 "Stupid human! How dare you gaze upon me?
I am Rocket Bunny the most fearsome, untouchable
beast ever known to...wait, what's going on??!!" 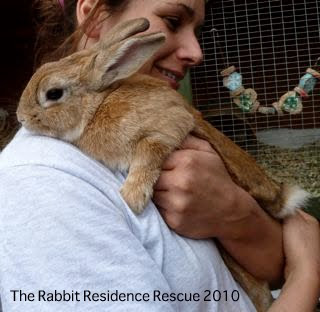 "Hey! Put me down! I'm the most feared
bunny here, you know! I could chomp
your arms clean off, I could!" 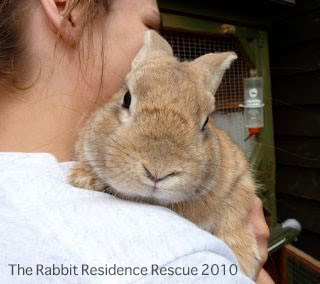 "Well...OK...ONE cuddle. But you better
not tell anyone - I have a reputation to keep
you see. And if this turns up on your stupid
blog you'll be finding the remains of that
camera in my litter tray..."
Posted by Bunny-Hugging Volunteer at 21:26 No comments: 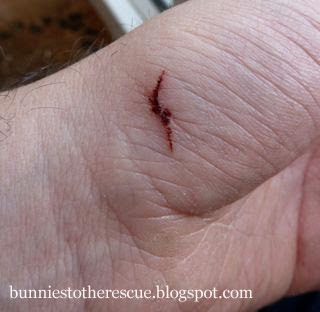 This is my hand - can you guess what today's blog post is about?

I received 2 messages about the tasks for today from Caroline. The first was a list of bunnies she wanted me to move around before opening up. The second one was sent to all todays volunteers and was predominantly a list of where all the rabbits are located, included with it the warning:

"Please note we have a rabbit who is suffering from nervous aggression and is prone to biting. His name is Rocket and he presently lives in emergency hutch 11"

Oh dear! The first time I met Rocket properly was a few weeks back when I was trying to put him to bed with his dinner and he proved to be quite a character. Where all the other bunnies either jumped straight into their homes at the sound of me rattling the bucket of pellets or waited cautiously at a distance just until I was out of the way before retiring, this little terror came straight at me and raced round my feet like a little puppy. He growled at me to keep away from his house and REFUSED to go inside. When all the usual tricks failed, I eventually resorted to picking him up and putting him in, but even that wasn't the end of it - he latched onto my sleeve with his teeth like a little terrier and wouldn't let go! So that was my first proper Rocket experience and it seemed that since then he had similarly attacked four other volunteers and been moved to one of the emergency hutches until a suitable girlfriend can be found to help calm him down! Oh well, at least today I would be prepared for him...

So onto the first task of the day, I set about moving bunnies. Those awaiting partners moved into the bonding sheds, naughty bunnies moved to warrens where they would be easier to round up, healthy pairs who have been at the rescue a while moved to be more visible to todays visitors. No bunny is especially keen on change, but most here are used to life with the friendly people at the Rescue and willing to just go along with it. You have to be a bit careful with the new arrivals of course, but bunnies like Bob and Pat who have been at the rescue for some time know that being lifted out of a hutch usually means at worst a bit of a brush and a cuddle so they are perfectly fine. I said hello to them, stroked Pat's head, explained to her that she was going back out into a nice big warren and reached round to lift her out and into a carrier. In an instant she went from sweetness-and-light to a total grump-a-sauraus and buried her teeth in my hand! All that thinking about how I had to be wary of Rocket Bunny and I'd been totally caught off guard by one of the friendly ones!

So todays important lesson (re)learned - rabbits are territorial prey animals. If hands reach into their home to grab them, there is a good chance they will feel threatened and either panic with fear or fight back. The result is much ouchness.

Once the flow of blood had subsided and Bob and Pat had been moved to their more spacious warren, it was breakfast time for bunnies which gave me the perfect opportunity to restore the balance of power. So when I reached their warren, I sat myself down on the grass, looked them straight in the eyes and asked them, "Do naughty chompy bunnies get tasty broccoli snacks for breakfast?" Apparently they do - they gently planted their front paws on my legs, adopted their sweetest bunny faces and proceeded to eat their breakfast out of my hands. Awww...what was I mad at them for again?

Posted by Bunny-Hugging Volunteer at 19:44 No comments: