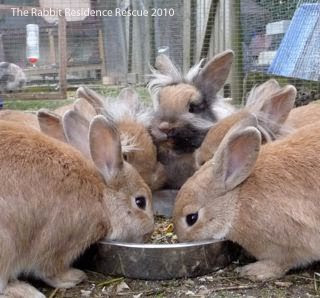 As friends of the Rescue will be aware, we have been required annually to re-apply for planning permission to remain on our current site. This is largely due to our proximity to (and access through) a residential area.

Recently, in preparation for the current application, we contacted the local residents and asked them to let us know of any concerns they had so that we could address them. Most of the people we spoke to were very positive. The only concern we encountered was with the way in which waste was removed from the site and as a result we implemented a new system which eliminated all of the problems highlighted.

So having met the conditions of last years planning approval (limiting the vehicles on site in number and to volunteers only, visitors only on Saturday and only appointment etc) and addressing the only concerns expressed to us by the local residents, we were understandably surprised to hear that the Parish Council decided to recommend that the application this year be denied.

We have just a few days before the District Council make their final decision on our application, a decision that could mean the end of the Rescue. So please, if you support the work that we do, show your support by signing our online petition below. We have until 3rd March to convince them to let us continue to run the Rescue from our current site.

If you have any comments or queries regarding our planning application we would be happy to hear from you. Please contact Caroline at the email address provided on our website.
Posted by Bunny-Hugging Volunteer at 13:24 1 comment:

We love hearing from our rehomed bunnies and their families. Here is an email we received recently from a family that Caroline helped find a partner bun for (kindly rewritten for us to post here on the blog - thanks Andy!).

Rabbit Reconciliation - Bunnies fall out over ear-drops and VHD jab 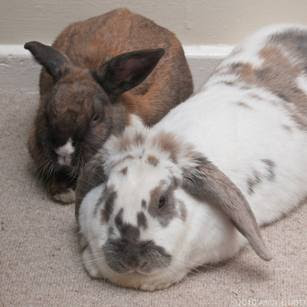 Magic and Wendy
(Picture by Andy)

After the death of our beautiful little Lionhead, Pepper, at the age of 9, we asked Caroline to find a new partner for our 5 year-old Dutch-cross house-rabbit, Magic. We have had a number of rescue rabbits over the years, mostly from Caroline. We wanted a rabbit of similar age and temperament – Magic is quite timid – so Caroline's rabbit, Spirit, was suggested.

Unfortunately, after a long time on her own, Spirit turned out to be most boisterous than we initially expected, resulting in unsuccessful bonding and Magic getting a bitten ear. Against this backdrop of a slightly distressed rabbit, Caroline suggested one of her new arrivals, Wendy. Wendy is HUGE – well, Magic is little, and against him, Wendy looks enormous (3.5kg lop vs Magic's 2kg). After a couple of days with Wendy, Caroline noticed that Magic was just a bit wary of Wendy. Unusually, she proposed that we bond Wendy and Magic on Magic's 'home turf' – to try to boost Magic's reticence with a bit of 'home advantage'.

I went and picked up the pair and brought them home. In preparation, I had bought a new indoor cage for their bedding area. Together with the old cage, each rabbit had their own cage and small area at the back of our house, but separated by bars at the edge of the cage. I had also set up a web-cam to view the two cages. With support from Caroline, I proceeded with the bonding, initially waiting a couple of days to see them take interest in each other and be prepared to sit by each other, separated by the cage. This was followed by a couple of nights 'swapped around' in each other's cage to reinforce the familiarization of the other rabbit's smell. I then trialled the rabbits in the living room, to see how they reacted to each other with unrestricted access – there was wariness and a bit of chasing away, but nothing too serious. I followed this up by allowing the rabbits access to each other’s cages over night for a few days until they were happy to sit together in one cage. The second cage was kept as a bolt-hole, eventually being removed after a further 3 or 4 days. With the web-cam, I was able to observe them cleaning each other – bonding seemed to be complete...

However, trouble was ahead... Magic needed stitches removed from his ear following the earlier ear-biting incident with Spirit. Wendy needed her spay stitches checked, her waxy ears looked at and her VHD vaccination. Off we went to the vets... All went to plan and we were given some drops to help break down any remaining wax (Caroline having spent some time with a rather annoyed Wendy removing the wax from her ears with cotton-buds).

On return home, Wendy was a bit off-colour (naturally, after a vaccination). She also didn't like having the drops squirted in her ears – and the drops smelt funny too! But all was well... Except a day later, the rabbits were chasing each other around and trying to bite the other's backside. This was very depressing, having successfully (!) bonded the rabbits – my first attempt at this sort of thing. I spoke to Caroline, looking for advice. Obviously they needed to be separated. The bad reaction may have been a combination of Wendy being understandably grumpy and Magic not recognising her scent, masked as it was by the ear-drops.

So, the second cage returned... They went back to the bonding arrangement for a couple of days, separated, until I was willing to risk having them have access to each other. The main problem then, rather than aggression, was that the second Wendy got near Magic, he would run off. Still, no fighting... So they had separate, but accessible cages for a further 3 days. Eventually, they could be sat next to each other without one of them running off. Back to one cage... Not exactly 'in love' though... Anyway, 1 week later, they are cleaning each other and all is well again – it just needed a bit of time.

The moral of this story, if there one, is, don't try to force the rabbits together, give them time on their own without human interference. And, if things go wrong, all is not lost. The situation can be recovered with a bit of patience and care!

If you have adopted a bunny from us and have an amusing or interesting tale to tell, please contact Caroline via the email address on our website.

Posted by Bunny-Hugging Volunteer at 13:15 No comments: