There are three very important reasons why your rabbit run might need a roof. They are:

I'm not talking about the rabbits, even though they are quite capable of all three (or at least, I've met a number of bunnies who appeared to THINK they could fly). I'm talking about those creatures that would seek to do your bunnies harm.

To better illustrate this point to recent enquirers, one of my colleagues spent some time on YouTube searching for some helpful videos to demonstrate and found these:

Jumping:
I can't jump over the fence

Flying:
Rabbit Outsmarts Falcon
(Don't get too excited - this was the one video I found in this genre where the outcome was anything short of horrific.)

So there you go. Today we have learned why a run needs a roof, why it may not be safe to leave bunnies playing outside in the garden all day and that a fox is a cross between a cat and a dog. Who said this blog isn't educational?!

Posted by Bunny-Hugging Volunteer at 12:25 No comments: 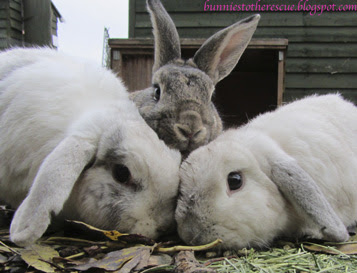 Purdy, Hopppy and Whisky share a quick snack
before getting back to the business of fighting.

Well, that didn't work. We tried to find Whisky a new friend (or friends), but all he did was learn new ways to express his lack of bunny social skills.

Being a bunny with no incisors (front teeth), he can be a little outmatched when meetings with other bunnies turn hostile. His new trick for balancing the odds is to pre-emptively pummel them on the nose with his front paws when they are least expecting it, leap on them while they are still surprised, kick them in the back of the head and run off. It started as a response to the unfriendliness of the first girl we tried him with, but once he got the hang of it, and possibly because the first one was such a moo, he decided to apply it to any future bunny he met that looked at him funny. Or thought of looking at him funny. Or had eyes.

Consequently the rest of the bonding attempts did not go well for Whisky, the last one so much so it ended at the vets having his perineum stitched back together. Ouch.

So poor little Whisky is very sad. He has to suffer pain while his injuries heal, the indignity of being force-fed medicines and the loneliness now he doesn't even have foster bunnies sharing his room to glare at. But at least he is home again and I get to cuddle him every day, even if it's only long enough to empty a syringe full of anti-biotics into his mouth.

Posted by Bunny-Hugging Volunteer at 20:42 No comments: 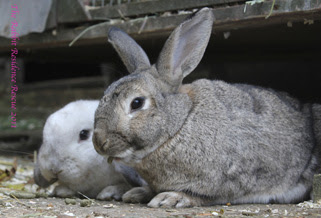 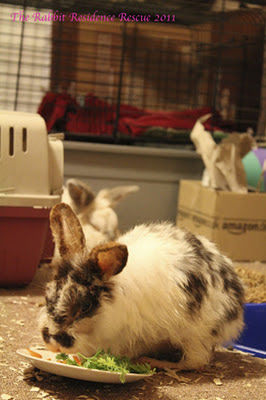 Posted by Bunny-Hugging Volunteer at 20:26 No comments: 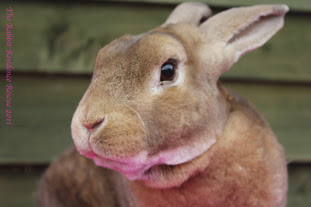 As we've had a few non-bunny-picture posts recently, thought I'd throw in a picture of one of our recent arrivals to balance things out!

After a long period of having no Rex bunnies coming in, we suddenly find ourselves with about 20. And unusually, since most of our previous Rex residents have been the cautious types, they all seem very bold and friendly.

Several of them really stand out - so meet Aslan, above, one of my favourites. I don't think he will be with us very long though, he's such a handsome and amiable chap. I just hope he's with us just a little bit longer so I can catch some more great shots of him like this one! :-)

Posted by Bunny-Hugging Volunteer at 19:02 No comments: