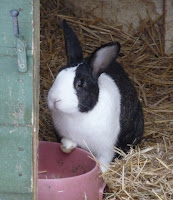 Nestlé was always the quiet one of the group. While Hoppy would, well, Hop around frantically and Perdy would demand food in a (sort of) bossy way, Nestlé was somehow much more serene. He’d look at you expectantly, with his big brown eyes, whether it was for a carrot or some kale, or for a tickle of his ears. Oh how he loved his ears to be tickled. If ever a rabbit went into a trance when he was stroked it was my little Nestlé and I adored him for it.

Sadly, after a difficult start to his life when he was mistreated and abandoned, along with Perdy, Hoppy and Spirit, he never found a new home, despite thoroughly deserving one. But he (and they) never held their treatment against people - it never ceases to amaze me how wonderful bunnies can be with people when all they’ve known from us previously is torment and neglect.

Nestlé, like Perdy and Hoppy, also had his moment of fame on (almost) prime time TV. OK it was only the Peter Andre show, but Nestlé was the star. Calmly surveying his surroundings, he outshone all his human hosts. What a performer!

This isn’t just about Nestlé though. It’s about him, Perdy and Hoppy as a family and how wonderful they were. I know I wasn’t the only one who regularly found ‘excuses’ to go and sit with them, play with them and have my lunch with them; even the more hardened bunny minders found excuses to do so. Caroline herself said she would have found it very hard to let them go, they were such a wonderful group.

I was lucky enough to see Nestlé one last time on the Sunday before he died. It was all too brief and we still didn't know how ill he was, but he still adopted his happy little ‘stroke me’ pose at the back of the bunch. And stroked he was.

He died on 3 September of a suspected brain tumour, but we will never really know why. I’ll miss him loads and miss the three of them being together. I hope he soft chewed his way into whatever counts as bunny heaven as that’s where he deserves to be.