Last year was a busy one for the Rescue and 2012 is looking like being no less crazy. So here's a quick look at what's going on and what we have coming up.

Last year Vicki and Colin started the process of turning the Rescue into a fully blown registered charity. The last few months have involved lots of researching and form filling but it looks like their hard work has paid off and we have finally reached the application submission stage. If we are granted full charitable status it will be a big boost for the Rescue as it will open up opportunities to apply for grants, as well as receiving more money from donations through additional tax relief. All in all it should be a good thing for the Rescue, we just have the anxious stage waiting to hear if our application was successful.

Next on the agenda for 2012 is re-applying for our planning permission to be extended so we can remain on our current site. More hard work and form-filling for Colin! Our last application in 2010 was granted for two years and since then our relationship with the local neighbourhood has been mostly positive, so fingers crossed we will be granted at least another two years before we need to re-apply.

It has taken some time, but we are nearing the point where all our rabbit warrens have predator-proof enclosures so our residents can have lots of space to run around in even when there are no volunteers on site to keep an eye on them. This month we used some of the extra money we received in seasonal donations to purchase three more walk-in aviaries. A big thank you to all the generous friends of the Rescue that made this possible and to Paul and his team at Aviary World for all their hard work making and assembling them! 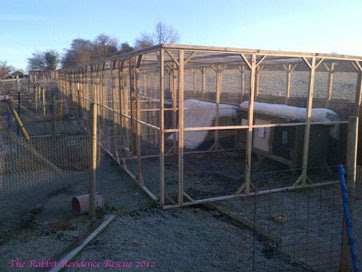 We still have a bit of work to do to make them "dig resistant", but it is all looking good. Our next phase is to re-start the work to move the other warren spaces over to the opposite side creating a path down the centre of the Rescue, thus making cleaning and bunny-viewing more practical. So if anyone out there is good at DIY and/or moving fences and would like to offer their time let us know!

We are always at capacity on site at the Rescue, so to cover emergencies we sometimes utilise space in the houses of the senior team. To put that another way, if you are an experienced rabbit person who volunteers at the rescue every week, there is a good chance that at some point Caroline will call you to ask if some extra bunnies could live in your spare room for a while. Since September we have had an unusually high number of pregnant does and unwanted litters handed in so many of these have gone to live off site until they are ready to be re-homed. As they become more mature, the young ones start to show aggressive or amorous behaviours and need to be separated. Practically this often means they are returned to the Rescue or switched with a younger litter, but this means they are taking up more space. The knock-on effect is that the waiting list for rabbits coming in is now moving slower. It also means more neutering costs which means the Rescue is under more pressure than ever - we are really going to appreciate that extra donation money when the charity status is confirmed!

Another positive change for the new year is that we have had a sudden surge of new volunteers. We now have a sizeable Saturday cleaning team of young and enthusiastic people, eager to be put to work. This is a big, big help, especially since us oldies are starting to creak when we have to bend down to clean those bunny bungalows! Thanks team! :-)

As for our existing residents, they are all doing well and I think enjoying the (so far) mild winter! As I wrote in my previous post, some of the elderly and vulnerable buns went to volunteers for the colder winter months to live as house rabbits, where they are all having fun causing all sorts of chaos. One of those pairs was Ragdoll and Timmy, who went to stay with Nicola and Gareth, as Timmy's health has been going downhill for some time. Very sadly, Timmy passed away on Thursday morning. He was another very precious bun and we will all miss him terribly.

I have no idea what has prompted it, but I swear our wilder residents are braver in 2012. Whereas previously some would exercise a degree of caution around me when at breakfast time, the quieter ones now take food out of my hand and the bolder ones will happily barge me out the way to help themselves from the food bucket before I have a chance to put anything in their bowls! 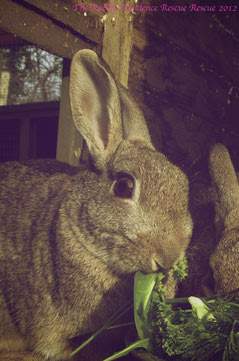 So here we go, another new year of exciting possibilities at the Rescue. I would just like to end this by saying thank you to everyone for your support in 2011 and we look forward to seeing you all in 2012!

Posted by Bunny-Hugging Volunteer at 17:54 No comments: