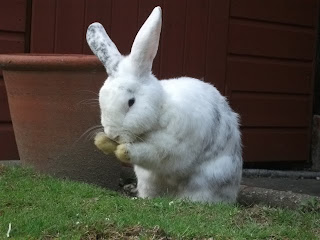 Saucerer, one of the rescue’s long term residents, was helped to rainbow bridge on Friday 26 November.

Saucerer was one of the most placid, gentle bunnies that we have ever known. He never showed any sort of aggression and was happy to accept whatever came his way. On the day Caroline went to collect him, she found that the child at the house had just poured orange juice all over him, his teeth and claws were overgrown and he was stuck in a tiny hutch. With all of his problems, the vets didn’t hold out much hope for him but, when we first met him, he had already been with Caroline for several years. 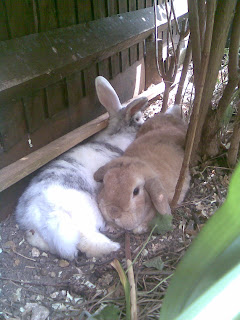 In June 2009 we offered to help the rescue by letting a special needs pair live in our spare bedroom and so Saucerer and India became our first foster bunnies. By this time, Saucerer had virtually no teeth left and a hole in his jaw. His veg had to be grated, his pellets soaked in water and he had to have an antibiotic injection daily. In addition we periodically had to use tweezers to remove food and bits of bone from the hole in his jaw. During his time with us he had to undergo several anaesthetics to have his mouth cleaned out properly and each time the vet told us his jaw bone and teeth were rotting away. Yet he remained the same gentle, accepting bun as always, never complaining or causing trouble. As time went on, we had to start boiling his veg and making it into a mush so he could eat it and, as the hole in his jaw got larger, food would come out of the hole and his face and neck would end up very messy. Yet still he continued to be a happy, gentle bun who would sit very patiently whilst we gave him a wash and blow dry. Eventually an abscess formed on his cheek and another in the hole in the jaw and we knew it was time to say goodbye.

Saucerer was a real example of why the rescue exists and how it can change a bunny’s life for the better. Our favourite memories of him will be him binkying down the garden path every time he was let outside and the way he would stand up on his hind legs to reach for the plate as you went to put the food down in front of him. We are very grateful that he had a peaceful end without suffering and we feel very privileged to have known him. Our house will not be the same without him. 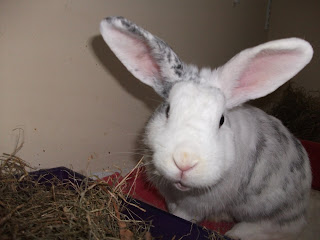 Time for another dip into our "post bag"! Here's a lovely story from a friend of the Rescue who recently took one of our single bunnies into her family.

When I first met Caroline I had a house rabbit, Honey. I thought that Honey was a happy rabbit - she would spend hours sitting in between my feet as I tapped away on the computer and would happily sit on my lap for a couple of hours each night as I stroked her. Caroline said that Honey should have another rabbit for company and suggested one at the sanctuary who had been a house rabbit. When Honey met Trevor (who I renamed Truffles) their friendship needed to be encouraged by putting pineapple juice on their foreheads, they licked each other heads and so started a friendship that lasted a couple of years. 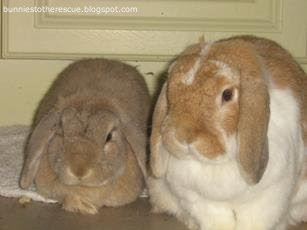 Honey and Truffles were inseparable and always sat together. 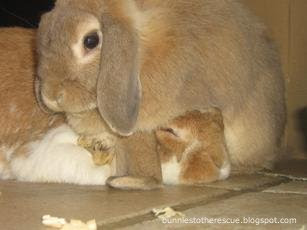 Sometimes Honey’s over enthusiastic affection could leave Truffles
a little squashed but he didn’t seem to mind!

Sadly, Honey was not a well rabbit and Truffles was clearly very lonely when Honey died.

When I contacted Caroline to let her know that I was looking for a new mate for Truffles she suggested several rabbits. One of them was Ephra. When I first looked into Ephra's hutch I thought that it was empty - then I saw her huge black eyes peering out at me from the back corner. Ephra was a very nervous jumpy rabbit who was happy to hide from the world. And no wonder, before she came to the rescue she had been living in a shed with several other rabbits, the result of a pet shop selling a rabbit to an elderly lady and getting its sex wrong so the rabbits bred. The owner was soon over run with rabbits and on becoming ill her sister contacted Caroline for help. By then the problem was sizeable and Caroline bravely took on about 50 rabbits. 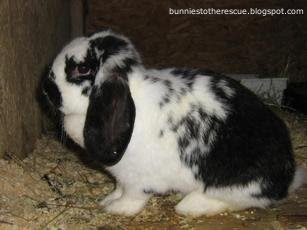 Unknown to Caroline Ephra was pregnant when she arrived at the rescue, her young age and the stress of being moved were probably what contributed to Ephra destroying her babies as they were born. She had had a tough start and no wonder she was nervous. Her huge black sorrowful eyes just made me want to give her a chance. She probably wasn’t the best match for Truffles but Caroline was happy to bond them. Ephra was intrigued by Truffles who rather rudely sat with his back to her. Eventually they started to get on. When Caroline brought the pair of them back to my home, Ephra hid in the corner of the kitchen under a chair. Truffles was pleased to be back home, had a quick sniff around and wanted his usual stroke and tickles from me. He then remembered Ephra and though he never usually sat under the chair before went and joined Ephra to keep her company and reassure her that all was well.

That was two months ago now and during that time Truffles has really helped Ephra (now called Moet) to gain her confidence. She is first to dash across the kitchen floor in the morning to greet me and stand by the fridge where she knows that her greens are kept. She knows the sound of the dried food tin lid being lifted and even dashes into the utility room to help herself to extra hay. 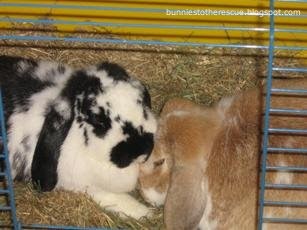 Moet and Truffles are great chums and much to Truffles relief he does not have to spend his time sitting under the chair in the corner to be with her. Truffles likes to do a bit of DIY and Moet is keen to help, they spend many a happy hour reshaping a cardboard box to get it just how they like it. 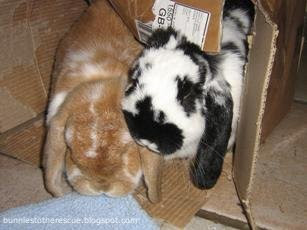 They have a big outdoor run where they enjoy eating grass and leaves from a cherry tree, and like an old married couple are back inside to sit side by side and join me watching Coronation Street! Although Truffles tends to fall asleep. 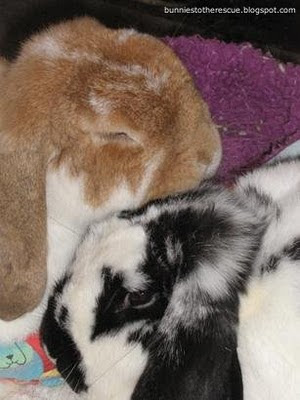 Without Caroline neither of these rabbits would have had the opportunity of a better life than they had had prior to coming into the rescue. Like so many other bunnies they have a great deal to thank Caroline for.

All pictures provided by Sue

What a crazy summer and autumn we have had here at the Rescue. Two of the emergency cases we dealt with have between them added over 40 rabbits to our intake, on top of the steady influx from our ever expanding waiting list.

It is only due to the dedication and quick action of our volunteer team (along their willingness to become foster parents at short notice!) that we have managed to deal with the chaos and high numbers. But even with so many bunnies living off-site, the costs of dealing with all the health problems they came in with, as well as all their standard vaccines, still lie with the Rescue. The result is that the Rescue now finds itself over six thousand pounds in debt, mostly from veterinary bills. Ouch.

Fortunately for the Rescue, which is run entirely on donations from the public, we have an enthusiastic team of fund-raisers on the case. This year they have pooled their creative talents to come up with some fun merchandise to help raise extra donations. Here are some of the things currently on offer: 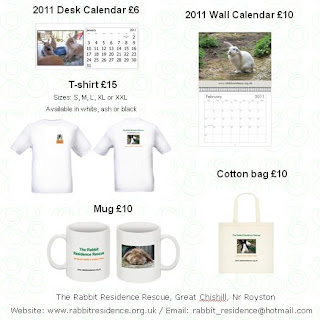 If you are interested in one of these items, please contact us either through the usual channels or to by emailing our fund-raising team directly at

They look pretty great to me, but then I can't help feeling I've seen some of those amazing photo's somewhere before...

Special thanks to Nicola for doing almost all of the hard work on this!

Posted by Bunny-Hugging Volunteer at 12:16 No comments: