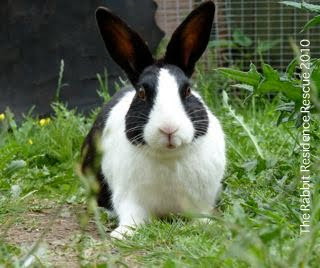 I had the phone call I was dreading today. The vet found something on Megan's leg x-ray that they are not happy about. They can't tell for sure at this point what it is - they say it could be a fracture or something tumorous. I do feel slightly relieved that we are making some progress in finding out what is causing her pain, but the thought of what either of these diagnoses could mean for our little angel fills me with worry.

She is scheduled in for another x-ray next Friday so we should know more then. In the mean time I think she is about to be on the receiving end of many (very careful) cuddles.

Posted by Bunny-Hugging Volunteer at 23:31 No comments:

There Are Good Days, And Then...

June 2010 is turning out to be one tough month. I am struggling to remember one that has left me so constantly tired and emotionally drained.

Firstly, Megan has been dropping weight for weeks. She has been in for 3 dentals already this year where she is not eating properly and her constantly-growing bunny teeth are not being ground down evenly. It is frankly heartbreaking to see such a beautiful little soul who survived such a difficult start in life just waste away with no clear indication as to what is causing it.

A Bengal cat belonging to one of the neighbours seems to have taken a renewed interest in the Rescue and has been found prowling around looking for trouble on more than one occasion this month. It has now taken to attacking Jessica the Rescue cat, which is a worrying turn of events. We are already keeping the bunnies inside when there are not enough volunteers to keep watch over them, but we can't put poor Jessica in a shed and run. (Well, not if we want to keep our arms scratch-free anyway!)

So when Arnie decided to dig a secret little tunnel out into the neighbouring field and disappear for two days we were understandably concerned for his safety. He did return, but only after Caroline had cleared bushes and dug the hole bigger so he could easily find his way back to his home and his wife Satin. While we were wracked with worry, Arnie (judging by his eagerness to get straight back out there again) was having a buntastic time racing around in the open air. So the first thing we had to do on his return was move him into the Impenetrable Fortress known as "Bunny Bungalow 3". He is not amused. 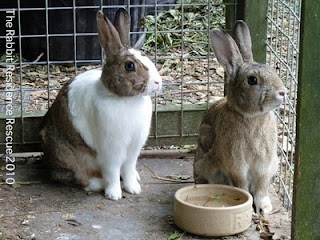 Just as we were starting to feel relieved about Arnie, I opened up one morning to discover Megan limping. She hopped from the front of her warren to the back without putting her back left foot down once. There was no obvious ailment, so two trips to the vet and an x-ray later, she was diagnosed as having a swollen knee (do bunnies have knees?). No idea how it happened of course. After two weeks of medicines she is still distressed and not using the leg. We have confined them to a comfortable smaller space, but now Whisky is getting unbearably grumpy. To top it off his eye has flared up again (probably all the stress) which will probably be another trip back to the vet's to have his tear-ducts flushed. 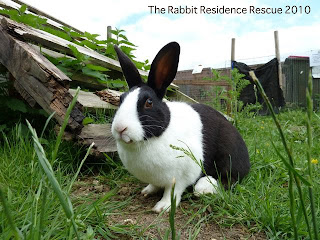 Megan with her poorly leg.

Hansel and Tiara were both recently diagnosed with ear abscesses and last week had surgery to have them removed. No sooner were they back at the rescue when a health check of Tibby and Jingles, ready to go to their new home, turned up a jawbone abscess in Jingles. So tomorrow, probably accompanied by Megan and Whisky, we are packing him off to the vets too for an operation to have it removed.

We have known it was coming for some time, but it hasn't softened the impact. For years, the owner of the neighbouring piece of land has allowed Caroline and her family to use it to access the Rescue from their house on the other side. A farmer rents the main part to grow crops, but the access route runs down the side. Sadly, the owner of the land died earlier this year and her family have decreed that no-one, including Caroline, is allowed to walk across it. This is despite the fact that the main access to their field is effectively through the Rescue the other side. It seems like a little thing (it's only an extra 5 minute walk through the village) but when Caroline is back and forth sometimes 20 times a day, that is a lot of lost time.

So then we come to Sunday of this week and the most depressing part of the month so far. Vicki, one of our newest volunteers opened the Rescue and found dutch/wild cross bunny Zeta had been badly attacked. Her skin was quite literally ripped to shreds. It is quite frightening to think that her brothers Tansley and Thistle could be responsible, but at least as likely is that she had picked a fight with a wild rat. Caroline rushed Zeta to the vets who did their best to save her, but despite coming around from anaesthetic and being stitched up, she died. We suspect the shock, pain and trauma was just too much for her. It was very sad and has deeply affected all of us.

I'll spare you the details of how I came to see the insides of a live rabbits leg this week, but that is basically June 2010 (so far) at the Rescue. Hopefully I will have some more positive stories for you in July. Thank you for listening.

Bunny-Manga "Apocalypse Meow" is getting a computer-generated make-over this summer. Episodes will be released through YouTube from 17th July, which gives you just enough time to brush up on your Japanese! Usagi desu!

[UPDATE: Not sure what's happening here since my Japanese skills are minimal, but the trailer has now been removed. :-(]

Posted by Bunny-Hugging Volunteer at 00:02 No comments: 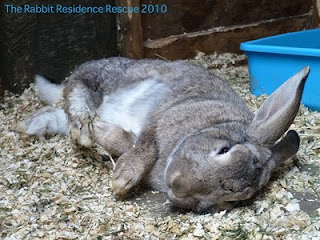 Looks like Hoppy has had quite enough fame for one month. Time for him to disappear back into his shed for the rest of the day for a well deserved nap. 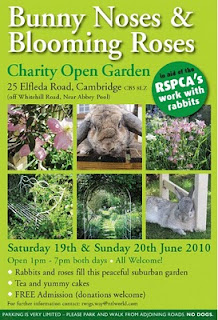 Friend of the Rescue and regular contributor to the RWAF's Rabbiting On magazine, Twigs Way is holding her annual Bunny Noses and Blooming Roses weekend in Cambridge UK later this month. Entrance to the event is free, but visitors are welcome to make a voluntary donation which will go to support rabbit charities and rescues in the UK.

For more information please see the poster above (click for larger view).

Posted by Bunny-Hugging Volunteer at 12:28 No comments:

On Tuesday the Rescue was featured on the Channel 4 television programme The 5 O'Clock Show. Caroline and Annabel took Nestle, Perdy and Hoppy down to the studio, they all got to meet Peter Andre and the bunnies were cuddled on TV by Peter and his celebrity guests. It was only a brief piece, but it was good publicity for the Rescue and has led to an increase in queries and appointments. Our hope of course is that this will translate into more bunnies rehomed and maybe even some more donations.

Not surprisingly, all of today's visitors were keen to meet the famous bunnies and so Nestle, Perdy and Hoppy had even more attention than usual. But did their brush with celebrity and increased popularity go to their heads? Of course not - they are the same down-to-earth bunnies they always have been... 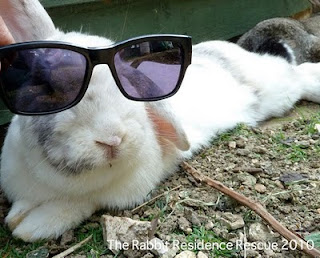 "Be a darling - put some carrots on ice and bring
me an Evian would you?" 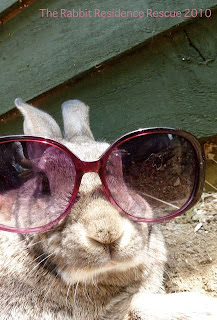 "Yes of course you can stroke me. I'm sure
my agent can slot you into the calendar.
How does August work for you?"