Having spent the week at the rescue learning new skills, I returned home to have my own bunnies teach me something too. Never EVER hold an open container of treats within striking distance of tiny paws.

I also learned that bunnies can clear up spilt snacks much faster than I can. 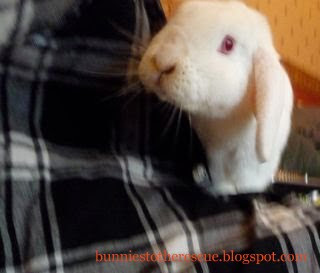 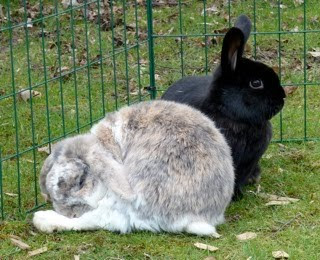 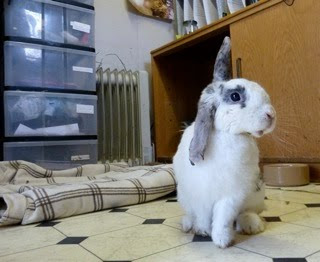 Posted by Bunny-Hugging Volunteer at 17:34 No comments: 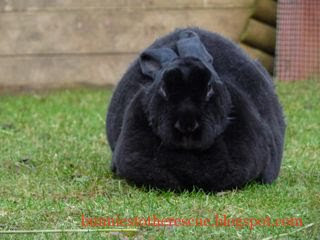 "Wake me when the grass has grown back"

Rabbit Awareness Week is next month and it looks like this year they will be focusing on rabbit obesity. For much like us humans, a rabbit who is overweight is at much higher risk of all sorts of quite serious medical problems. And this is something we see not only in the rabbits that have been removed from bad situations and passed to us by the RSPCA, but even rabbits subsequently adopted from us into otherwise idyllic situations.

Part of the trouble is, when trying to make friends with an animal, or even just trying to get them to pay you attention on a daily basis, it is all too easy to fall into the trap of bribing them with snacks. With bunnies, it can be the choice between sitting patiently on the floor for what might be an hour before they decide to give you any attention, or rattling the snack jar and immediately having bunnies clambering all over you. But at the end of the day, we love our bunnies and their health has to be paramount - with just a little more patience we can soon be enjoying a much deeper friendship with our bunny friends that is not based on treats.

Which brings me to Jemima. Yes folks, I myself am the parent of a very porky bunny. I know I am to blame, since every bit of food going into her has been put out or given directly by me, but I'm seriously trying very hard and running out of practical ideas. She has a reasonable amount of space (6ft by 3ft house attached to 6ft by 10ft run), at least twice daily access to the garden, a healthy diet of veg and some "lite" pellets with unlimited hay and grass. Since I realized over a year ago that she was scoffing more than her fair share of the food, I have been separating her from Santa for mealtimes and despite being twice his size gets less food than him, especially pellets and carrots. And yet after all of this, she is still a fatty.

I think I know the main source of her problem though - much like me, she's incredibly lazy. All winter, if they were out for playtime you would find Santa grazing, exploring or tearing round the garden like he's on fire. Jemima's pastimes rarely extend beyond chomping and napping. Sometimes she even lies down to eat the grass in the garden.

At least Spring is just around the corner and I know that she is about to perk up. In just a few short weeks she will no doubt be chasing Santa all over the garden demanding his "romantic" attentions and his highly developed skills of evasion will hopefully help her burn some calories. And on top of that, I will be looking forward to all the exciting events that are taking place in Rabbit Awareness Week and looking out for some helpful tips!

Posted by Bunny-Hugging Volunteer at 13:03 No comments: