It was an odd day at the Rescue today. And not just because I managed to clean all three bunny bungalows without banging my head, swearing and declaring that I would never clean them again (an almost weekly ritual). It was odd because, as I was cleaning down the bottom end of the Rescue I barely saw a single rabbit.

It was not hard to guess why. This last week has seen the UK being battered by strong winds and today was no exception. Our residents were not too keen on being outside in the blustery weather.

And perhaps they had good reason. Earlier this week one of the trees bordering the Rescue was blown down over night, flattening two fences and barely missing Majestic and Glamour's shed. Because of the fences being down we had to move them over into Mindy's old shed so they would have a run to play in. They were clearly shaken, and rather than sitting at the front of their warren, waiting to mug passing visitors for broccoli, they spent much of the day huddled inside looking sorry for themselves. They weren't too happy later when we had to move them again either, but we were certainly glad we did. When the friendly local farmer pulled the remaining half of the tree down it missed Mindy's old shed by about a foot. 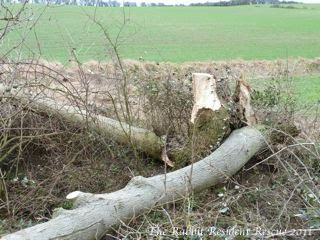 That which fell (bottom) and that
which was pushed (left) 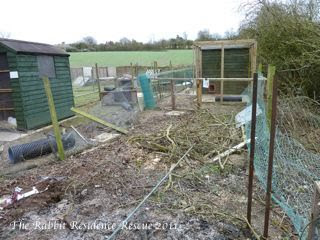 After the trunks were cut up and removed,
the flattened fence that remained
Posted by Bunny-Hugging Volunteer at 19:30 No comments: