I sat on the floor with my legs straight out in front of me. This is a completely passive position from which you can't easily lunge at or chase them, so they feel safe coming in closer to you. If I was trying to build a new relationship with two bunnies I might just ignore them at this point and let them come over and investigate me in their own time, but Jemima is well trained and Elvis trusts her now so I knew I could fast-track the proceedings. I rattled the snack jar and immediately Jemima trotted over and took a pellet from me. Elvis watched her with interest, then having established the protocol did the same. Wary at first, a few repetitions later and he started to relax.

Now to take them to the next step. I slowly leaned back against the wall and held out another pellet further away from them. Jemima leaned in and put her front paws on my leg and took it. Elvis circled round the back of her, put his front paws on my other leg and took another too. So far so good.

What happened next I did not expect. Jemima was watching Elvis chomping away at his share of the snacks when it seemed a thought occurred to her. Without warning she suddenly bolted. Believing that she had spotted some danger, Elvis panicked and in a split second he was off too, racing back into the safety of their bedroom. The MOMENT he was out of sight, Jemima turned round, trotted confidently back up to me and took the next snack as if nothing had happened.

I have no doubt that they have as strong a relationship as two bunnies can have and will always look out for each other. But it seems that for Jemima, looking out for ways to have more treats will always come first! 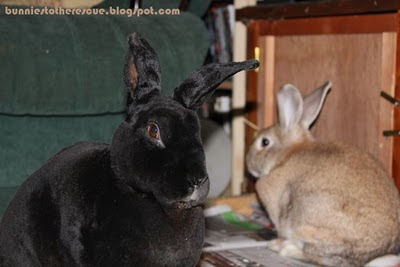