In July 2010 my husband came back from a day helping at the Rabbit Residence Rescue with a spare indoor cage and a pet carrier, explaining that Caroline had been involved in a large rescue and needed us to foster some bunnies for a while. We were already fostering some of her permanent special needs bunnies in our spare bedroom so when I opened the pet carrier and saw three little bundles of fluff, I was really excited at the prospect of looking after some baby bunnies for a change. Then the husband told me to look closer, and hiding behind the three fluffy babies was the tiniest rabbit I had ever seen. Smaller than a fist, its eyes were only just open and its ears were still flat against its head. Caroline had found it in a nest, amongst its siblings who were already dead. Caroline thought it was around 2 weeks old and wasn’t sure whether it would survive. 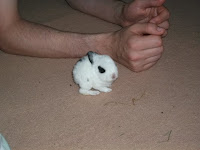 We got the babies settled in to the indoor cage and the three larger babies tucked straight in to the food we offered them. Caroline had given us some Cimicat for the tiny one and so we had our first attempt at hand feeding a baby rabbit. Luckily the baby seemed to want the feed and sucked it out of the syringe without difficulty. We then let the babies have a run around the spare room. The three big babies went crazy, binkying like mad. The tiny one tried to follow them but didn’t quite have the strength to hop and could only manage a very wobbly walk. When it had a wee on the carpet we were ridiculously pleased to know it could go to the toilet by itself.

When the next morning came the little one was again very excited when we offered the Cimicat. Over the next two weeks Pico, as the baby had now been called, continued to grow. We fed her twice a day and feeding time was a real joy. She would sit on a cushion on our lap and as soon as we offered her the syringe she would latch on and suck really strongly. By the end of the second week she could drink a full 1ml syringe within seconds and would take up to 15ml in one feed. After feeding she liked to snuggle in our hands for a 5 minute snooze before chasing around the room after the others. When the other babies were eating, she would desperately try to join in but her teeth just weren’t big enough. However as her teeth began to grow we started to hold out a Science Selective Junior pellet for her and she would grate her teeth against it and make it into a point! 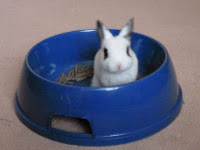 After 3 weeks of hand feeding with Cimicat Pico was finally able to eat pellets by herself. We were so glad that she had developed enough to be able to eat properly but also a little bit sad that we didn’t need to hand feed her any more. Over the next few months Pico continued to grow, along with the other babies who had now been named Jonny, Roberta and Albert. Albert and Roberta went back to the rescue first, followed by Jonny a few weeks later. All three of them have since found new homes.

Although we would have loved to keep Pico permanently we knew it wouldn’t be possible as we already had 4 rabbits of our own plus 2 cats and 2 foster bunnies. We therefore agreed that Pico would return to the rescue to find a new home once the winter was over. To keep her from getting lonely, she was bonded with Wellington, a single bun from the rescue who Caroline thought could benefit from a winter indoors.

Now that the weather has finally begun to warm up, Pico and Wellington have been returned to the rescue. Both are very lively and Wellington is always interested in anything that is going on whilst Pico is more wary unless food is involved! Hopefully it won’t be long before they find the perfect forever home that they deserve.
Posted by NickyB at 16:18 3 comments: 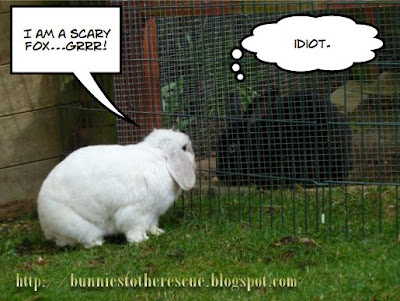 Whisky tests my predator-proofing of
Elvis and Jemima's run

I left Jemima and Elvis out in the garden unsupervised yesterday morning. I went into the house to get something and left them playing outside. I was only popping in for a second but got myself distracted.

When I realised, I felt really sick and rushed out to check on them.

I'd only been gone about two minutes. But I'm a worrier. Two minutes is all it takes.

A few weeks ago I was returning home and saw a whole group of wild bunnies playing on the grass near my house. They looked so cute and full of joy. But as I continued on I saw a fox. Silently closing in on them. I was in the car. I could have turned round, could have done something. But I knew it would be too late.

Foxes are cunning. Foxes are bold. I have foxes in my neighbourhood, seen them less than a minute from my house. On a busy Saturday afternoon, my friend's father caught one marching up the road with a neighbour's chicken hanging frightened, but thankfully still alive, from it's mouth. Foxes can dig under and climb over fences. I've seen photo's of them, staring down into gardens, sizing up their next meal.

Jemima and Elvis were fine of course. But something wasn't right. A noise. A shape. Something.

I looked up and there it was. On top of the shed, a big black cat. It was sizing up Elvis, who was merrily munching on the grass directly below, totally oblivious.

Cat vs Jemima - no contest. She'd just sit on it. Cat vs Elvis - not sure, he tends to panic in the face of the anything resembling danger (or claw clippers). Cat vs me?

When I first moved bunnies into the garden it seemed like every day I was chasing cats away. Never seemed to make a difference. They'd still come back. Me mildly annoyed and waving my arms? I guess they could sense I was no real threat. So I changed tactic. Now I "hunt" the cats that dare to cross my boundary. I quietly creep, I stalk, I pounce... They always see me long before I reach them. Unaware that this is my intention, they rapidly make their exit and rarely come back. How do YOU like being hunted, Mr Moggy? The claw is on the other paw now, huh?

So no real danger this time. Cat fled, job done.

I love my bunnies. I can't begin to imagine the grief I'd feel, knowing they had been torn apart by a wild animal. Knowing that their lives had been cut short, that they'd lived their last few moments in unbelievable pain and utter terror. I don't know how I'd live with myself, knowing I failed them in my responsibilities of keeping them safe from harm.

It is exactly these cheery thoughts that sit at the back of my mind every time I go out to check for the second (or third) time that I really did lock them back in after playtime. Am I sure I shut all the doors? It's too important to get it wrong - if I'm not positive I'll check again. The possible gruesome consequence fuels my cautiousness. The time spent predator-proofing the run, hours spent digging up earth, burying slabs. It's too important to get this wrong.

Not everyone imagines this horror. In the last few weeks we have had four rabbits we've adopted out reported to have been killed by (suspected) foxes. Four rabbits who have been left to roam free all day in a garden or open run, with no roof to protect them, or left unsupervised to escape. Rabbits who we cared for, got to know as individuals with their own little personalities, found seemingly perfect homes for. Not everyone imagines the horror and guilt - there are three families in Cambridge now living it.

In the next few weeks, as always, someone is going to visit the Rescue and tell Caroline (or me, or Debbie, ...) that they've had rabbits for years, let them roam free in the garden all day and never had a problem. "Do we really need a run attached to their hutch?"

Forgive us if our answer is a little on the short side.