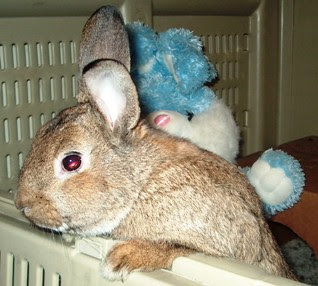 Thankfully, it looks like the Tacoma and Pierce County Humane Society have had second thoughts about ending the life of poor little Copper Bunny - they have now released Copper to a local rabbit sanctuary in Gig Harbor.

The Rabbit Haven Sanctuary is a larger operation than ours, having around twice the number of rabbits in their care (and I thought breakfast-time at our rescue was crazy!). So it looks like he is in good hands with expert bunny people who can give him the proper love and attention he needs.

For the latest updates on Copper's progress, check out the Rabbit Haven website, where you can also help Copper and other bunnies like him by making a donation to the sanctuary.

Many thanks to the Rabbit Haven Sanctuary for kindly giving us permission to use their photo of Copper on our blog!

Posted by Bunny-Hugging Volunteer at 13:06 No comments:

Yesterday I had the bitter-sweet pleasure of "Claw Day" with S+J, which to the casual observer is a cross between amateur manicure and professional wrestling. The plus for me is that during the procedure I get to cuddle my bunnies as if they were teddy bears. The down side is they hate it, hate it, hate it and are quite prepared to convey this point using all available forms of communication. Depending on their mood, this could include grunting, scratching, stamping or even biting. This month I got off fairly lightly. Beforehand, there was a moment where both bunnies simultaneously realised that the preparation of grooming tools and coiled body language could only mean one thing. A brief cartoon-style chase followed, involving some clambering behind the sofa by all parties. After the event, Jemima decided to explain to me that the post-clipping-reward-snack was of insufficient proportions, chomping down hard on my coat and trying to drag me across the room. It may have been a coincidence that this was in the direction of the tub of pellets from which she felt she should be further rewarded.

On Claw Day last month, Jemima decided much earlier in the proceedings that she was unimpressed with my efforts. Before I could even start on the first paw she came to the conclusion that her grunts of disapproval were being unfairly ignored and felt she needed to explain in terms I could not ignore. She promptly chomped my hand.

As a part-time bunny-wrangler for the Rescue, being gently (and not so gently) chomped by bunnies comes with the territory. I doubt there's a single long-serving volunteer here who hasn't been caught out by a nervous newly arrived individual, a bunny who has seen a hand coming into its home and mistaken breakfast delivery for an attack or territorial invasion. Even Caroline, after years of being able to predict when a bunny is grumpy and about to pounce, has been caught out a couple of times checking-in new arrivals. Then there are also the bunnies who, like Jemima and countless others, are not at all aggressive but use light chomping just to tell you something, usually that you are in their way or to stop ignoring them!

My point is, as bunny people, being chomped is a common occurrence that is driven either by utter, desperate fear or to convey something to you that you just don't seem to be getting. Not surprising then that this story of a bunny at an American Humane Society centre that has been scheduled to be put down for biting one of the staff has been enraging the rabbit-loving community across the globe:

Komo News' explanation of the incident seems to be that the severity of the bite, requiring the recipient to seek proper medical attention, is the centre's justification for terminating the rabbits life. However, the American Humane Society have subsequently released their own statement suggesting that the bite was not the reason for ordering the termination, only one of the symptoms of the rabbits dire physical and mental condition:

Link: Response by the Humane Society

Since I find it hard to believe that an organisation so dedicated to animal welfare would take the decision on a bunny's life lightly, I want to believe the Humane Society's version and suspect the original story is yet another case of sensationalist journalism. On the other hand, why when approached by local rabbit rescues with offers to take Copper did they not communicate the facts of the case sufficiently to prevent further protests, or provide them the opportunity to have the rescues own rabbit experts offer a second opinion and thus avoid becoming the villains of this story? According to their official response:

"Every year, the Humane Society receives about 90 rabbits, finds homes for about 70 of them, and has to euthanize about 20 for medical or behavioral issues."

This sounds to me like they are digging themselves a bigger hole. Surely:

Whatever the real situation here, I am pretty sure that the Pierce County Humane Society will be finding their working practises coming under very close scrutiny over the coming weeks.

NOTE: Since writing this entry I have discovered that the page I linked to on the Tacoma and Pierce County Humane Society website has become unavailable. Read into that what you will. I will leave the link as-is for now in the hope that it returns...

Posted by Bunny-Hugging Volunteer at 12:21 2 comments: 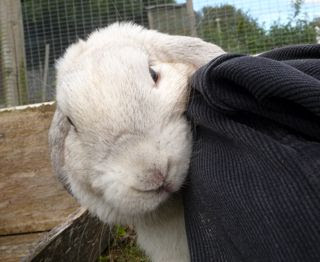 It makes me very sad to have to report this, but we have heard that our beloved Mystery Bunny has died. Mystery Bunny went out to adoption with her husband Majestic and it seems that she was tragically killed by a fox.

For the whole time that Majestic (who Helen has taken to calling Moo because of his cow-like markings) and Mystery were at the rescue, Mystery was particularly friendly towards me and would always come and say hello as I walked past. If I went in to their run and sat down on the grass she would clamber over my legs, snuggle into me and demand to be stroked. The two of them were absolutely adorable and the news of Mystery's passing was particularly painful for me to hear.

Posted by Bunny-Hugging Volunteer at 23:43 No comments: 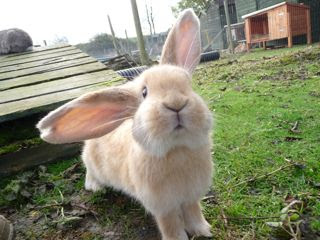 "Erm,thanks for finding my ears, but are
you sure you put them back on straight??!!"
Posted by Bunny-Hugging Volunteer at 12:57 1 comment: