Whisky has a new favourite spot. Now I can't be sure, but I suspect that it has something to do with the fact that when he's sat there:

The main problem with this in terms of the blog is that all pictures for the foreseeable future are going to look very similar while he won't budge his fluffy bottom.

So today, to avoid having a picture that looks exactly like yesterdays, I decided to switch the camera to "high contrast black and white". I think the setting is intended to produce pictures that look like a forties Bogart movie still.

So here he is, Sam "Whisky" Spade, private detective. 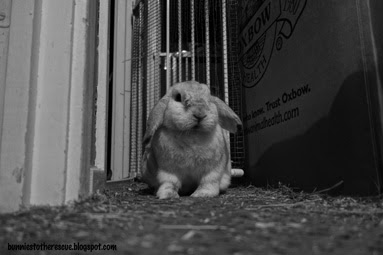 "Spade eh? I could find a use for one of those."
Posted by Bunny-Hugging Volunteer at 06:30