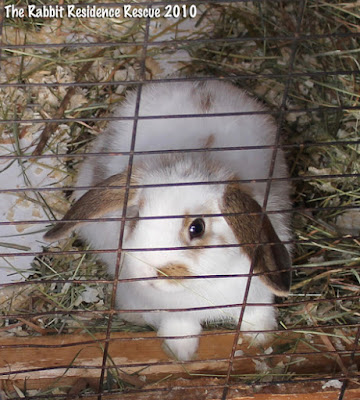 Sprat was born around August 2010. He was blessed with his mothers ears but cursed with his fathers bad teeth. The whole gang came into the Rescue later that year - Camilla (mum), Wellington (probably dad but also possibly uncle/half-brother/cousin), Zara, Spangle, Porridge and of course Sprat himself. 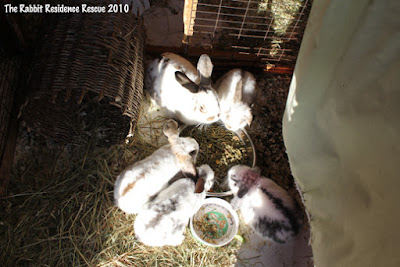 By the time they were old enough to start living away from mum, the kids individual personalities were already shining through. Zara was the cute and very sweet one, Porridge was the slightly bossy one, Spangle acted as Porridge's deputy in all things and Sprat was the friendly, determined type keen to take the humans for all the treats and attention he could get. We figured Sprat was going to be everyone's first choice buck and re-homed pretty much as soon as he was old enough. 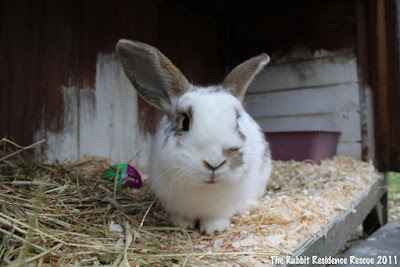 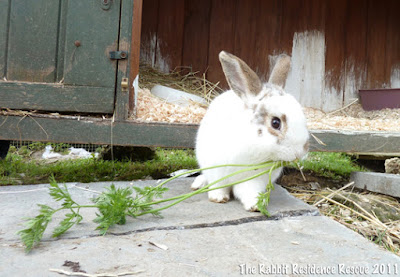 Porridge and Spangle, having already been diagnosed early on with dental problems, moved into my house sometime in 2011. Whisky, who was also dentally challenged, was looking for a new partner and we figured they would make a sweet trio. Shortly after they arrived however, Whisky started to suffer breathing problems related to overgrown tooth roots so the potentially stressful bond was postponed until after that could be resolved and he had recovered from the surgery. In the meantime the girls lived in a partitioned off part of Whisky's room, so at least they could all become accustomed to each other.

Although Sprat was indeed popular with visitors, by the time he was ready to leave the Rescue he had been diagnosed with dental malocclusion. It was difficult to tell the extent of his issues while he was still so young, but the potential for expensive medical problems further down the road was enough to put people off taking him on. Having been through it all with Whisky already, I wasn't bothered by it so we decided Sprat should come and join the party at my house. 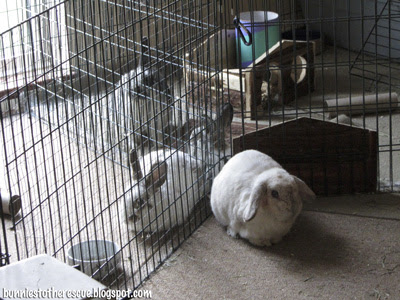 11th June 2011, shortly after Sprat arrives, no real tension but they all camp out at the intersection of the three areas

The extended period in Whisky's room already for the sisters created an odd dynamic. It didn't take them long to accept their brother as their new neighbour, but Porridge was very possessive over her space and would throw tantrums if I swapped them around during the bond.

"Join me for some binkies?" 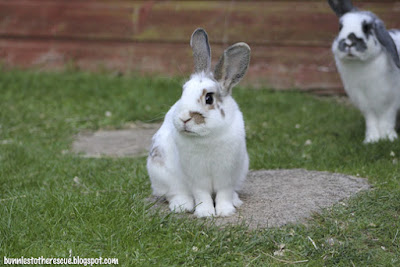 Out in the garden, on a good day they would all play and accept each other, but ultimately Porridge's bossiness and Whisky's lack of social skills would clash. Sprat all the while was a decent pal to Whisky, they got on perfectly well but Whisky's interest was clearly in the girls who didn't want his attention, so the siblings went back to the Rescue as a trio. 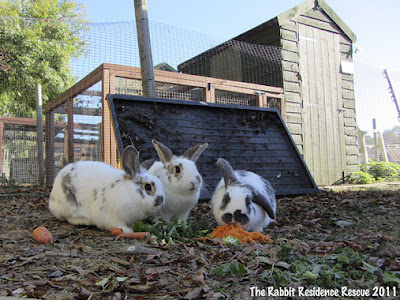 Theirs was not a healthy mix of genes. Zara sadly passed away still very young, Porridge died within two days of having her incisors removed, then Spangle followed in 2014 from respiratory issues. 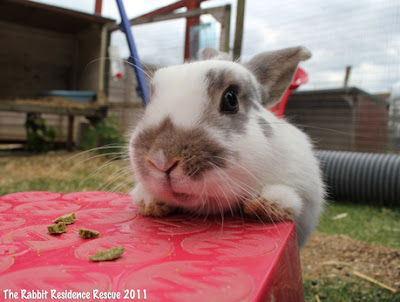 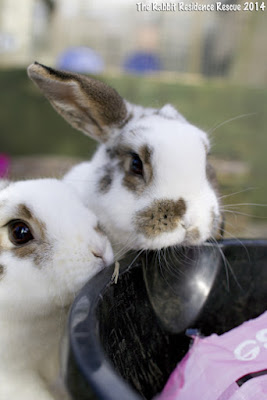 Sprat continued to have problems in his mouth, leading to the removal of his incisors, several abscesses and around six of his back teeth, plus a strange cyst down one side of his face. On top of this, his teeth would not wear evenly so he was having regular dentals, which all meant he had frequent anaesthetics. Fortunately for Sprat, he didn't need to worry too much about eating slowly because his next wife was Bugsy, who had about as many teeth removed as he had. They made a great couple and took turns looking after each other following surgeries and treatments. 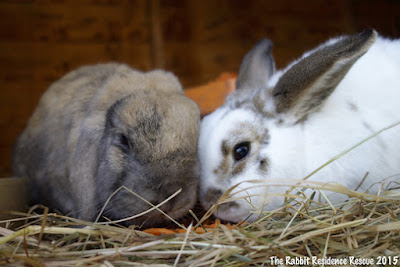 Sometimes Sprat's problems could leave him with low periods, but he generally bounced back to his perky happy self after a few days or after a dental. When he saw humans he saw the opportunity for treats and attention, so he would often race over whenever anyone passed their enclosure. Volunteers and visitors loved him as his confidence and keenness to mug them for treats made him one of the friendliest rabbits on site. If I was there on a Saturday, I regularly heard visitors asking after them and whether they were available, but no-one wants to take on high maintenance rabbits who rack up giant vet bills.

Last year I was desperately missing Whisky following his death in December 2015. He was such a friendly, humanised rabbit whereas my remaining pair don't really have any interest in non-rabbit interaction, so on top of all the grief, Whisky's departure left a big hole in my life. As Sprat was a former foster, I have always had a soft spot for him and would always make time for him at the Rescue, but Sprat came to mean more to me that year. My bunnies didn't want to hang out with me at home so for most of 2016 I got my bunny fix hanging out with Sprat at the rescue at the weekends. As well as having similar personalities, his former friendship with Whisky was something that we shared. And the more time I spent with him, the more I came to appreciate Sprat for the wonderful character Sprat was. 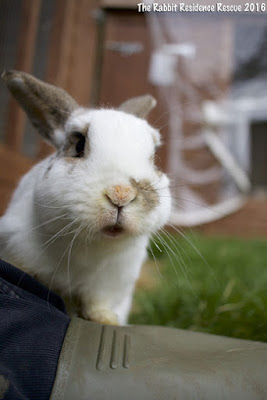 So when the opportunity came up, last summer I fostered Sprat again, with Bugsy of course, during the peak holiday boarding season to free up some space. They came to live in our spare room and had daily playtime in the garden. 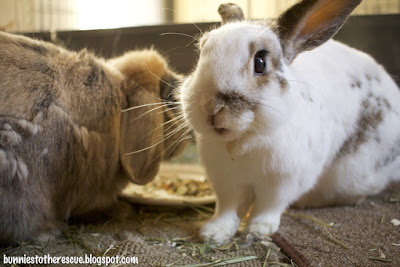 "Great breakfast! Is there dessert too?"

(I don't remember, but from the looks I'm guessing we'd just got back from the vets in this photo!)

Once he had figured out how to navigate the stairs he really settled in and was having the time of his life racing about the whole house. Bugsy didn't seem to like being in the house much, but in the garden she turned into a happy lawn mower and also enjoyed trimming the herbs we grew there for her breakfast. Meanwhile, Sprat would race about the garden and binky to his heart's content. Despite the constant back and forth to the vets during that period I really enjoyed having them around, I didn't even mind the twice daily cleaning out of Bugsy's ear and yucky ear abscess (she wasn't so keen though). Sprat stole my heart completely that summer and I wanted to adopt him, but unfortunately I struggled with Bugsy's daily injections so they had to go back to the Rescue. 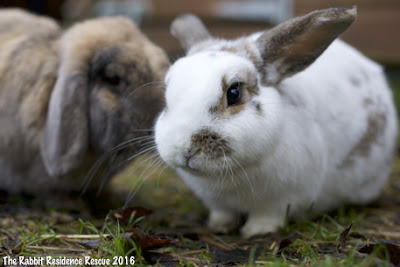 The last nine months have been difficult for both of them. Operations, medication, injections, nursing. I would visit them every few weeks, sometimes one would be pleased to see me, sometimes the other, usually dependant on what ailments and veterinary poking they had suffered that week. Bugsy particularly has been a worry the last few months, the open hole from her first ear surgery and the antibiotics were not clearing her ear abscess problem so she had a second surgery. This is so far looking promising, I was even starting to wonder if maybe some day soon they could come home with me again. But I guess I should have realised it just meant it was Sprat's turn to go downhill.

Last time I was at the Rescue, Bugsy was recovering from the latest surgery but Sprat was in a reasonable mood, so I actually got to spend some quality time with him. I thought at the time I noticed something odd about his eyes, like they were uneven, but when I had a closer look I dismissed it as paranoia. Then earlier this week someone else noticed it too and it was clearly worse. X-rays showed a growth behind his eye. He could have surgery to remove the eye and attempt to remove the growth, but at almost seven years old and with all his other problems the chances of him surviving the operation and living a happy life after seemed quite slim. Yesterday, 16th May 2017, with great sadness, we made the very difficult decision to let him go in peace rather than suffer any more. I haven't shed so many tears in such a long time.

My dearest Sprat. You gave so much joy to everyone you met and asked for so little in return. You touched our hearts so deeply. You were dealt a bad hand in life, but you still lived it with enthusiasm and excitement for all things. I loved you more than I can find words for and will miss you forevermore. Binky free, Sprat, binky free. 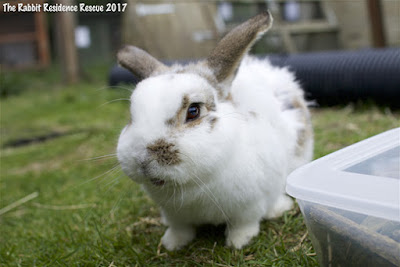 Posted by Bunny-Hugging Volunteer at 14:04