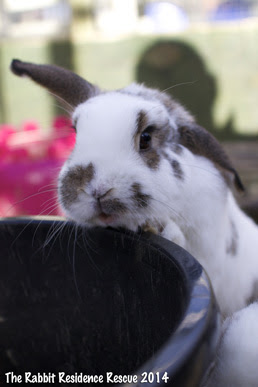 When I was writing this mornings post about Einstein it reminded me that with all the Whisky stress last week I didn't get a chance to tell you that my dear little Spangle passed away on 24th October. Very sadly, after suddenly coming down with severe snuffles a few weeks ago and with swabs and tests revealing nothing conclusive, she failed to respond sufficiently to antibiotics or nebulising.

Spangle came in to the Rescue late in 2010 with her mother Camilla, her uncle/father Wellington, her brother Sprat and her sisters Porridge and Zara. Here she is hanging with her mum in November of that year: 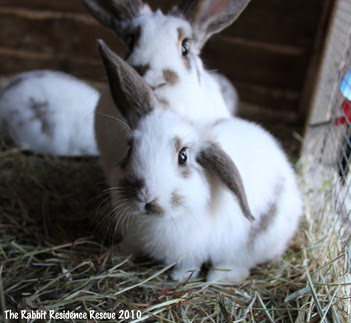 Whereas Camilla and Zara seemed perfectly healthy, Wellington and the other little ones all appeared to have wonky teeth issues. Zara was indeed re-homed fairly quickly but passed away shortly after, having succumbed to an upper respiratory infection in much the same way Spangle would.

With their teeth issues making them difficult to home, Spangle, Porridge and Sprat came to live with my own dentally challenged boy Whisky. They set up camp in his room, separated in their own areas. Although we had intended to bond them all, the first friends Whisky would have after Megan's passing in January 2011, this was the period he became very ill from his tooth-root problems and the bonding was delayed. After he got better, they would all play in the garden at the same time without fighting, but Porridge in particular was unwilling to let Whisky join their group. With no sign of it ever likely to get better, we eventually decided Sprat and the girls should go back to the Rescue, by this time bonded as a trio.

Porridge having the worst incisors of the lot was frequently having them clipped (not something we do now) so they had to be removed. Although the operation seemed to go well, she passed away in the days that followed leaving Spangle and Sprat as a pair.

Spangle's teeth actually settled down quite well compared to her siblings, but Sprat's needed burring so regularly that both bunnies really did look destined to live the rest of their lives at the Rescue. Having lived with me for so many months they had become my special little friends so they always got the prime veg when I did breakfast and of course extra attention. I try not to think about having more bunnies of my own, but since Jemima died last year there have been very many times I have come close to taking Spangle and Sprat back home with me.

My dearest Spangle, you gave me so much happiness, all those summer days watching you bounce around our garden and the Rescue! (Her binky pic was used with permission by Best4Bunny and regularly pops up on various rabbit pages.) Binky free my sweet little girl.

Posted by Bunny-Hugging Volunteer at 16:30