The Good, The Bad and The Wee-Wee

A couple of weekends ago when we had particularly rainy weather, I found Whisky taking a nap on the arm of the bunny sofa. I presume this is because though he didn't want to go outside and get wet he still wanted the best vantage point he could to see any shenanigans going on with the foster buns in the garden run. For a bunny that doesn't have the greatest balance, especially since his ear surgery in January, sleeping next to a drop to the hard floor struck me as not the best of his ideas, but I left him to it - it's not like he welcomes me expressing my opinion on these things.

Later that day I heard the sound of claws on cloth - he had jumped down to the cushion and was merrily trying to shred it into a more comfortable place to snooze. So I took one of his nap-blankets and put it on the sofa. Problem solved, happy bunny.

Later that afternoon I noticed he had moved back onto the arm. I just knew something odd was afoot and on investigating, lo and behold, he had emptied his bladder into the blanket. No harm done, so I let it slide, but slightly frustrating when he was only half a dozen hops from a litter tray.

A week or so later however, he decided to repeat the trick on the human sofa, with no blanket, while I was upstairs sorting out photos for the Rescue. I knew what he'd done before I saw it, there was just something in the way he suddenly re-appeared as though wherever he'd just been was no longer a comfortable place to be. When you've lived with somebun long enough you can read them like a big neon sign.

So anyway, as is the rule in our house, unsupervised roaming privileges for Whisky have been revoked. Don't feel too sad for him though, mostly it just means I have to follow him everywhere... 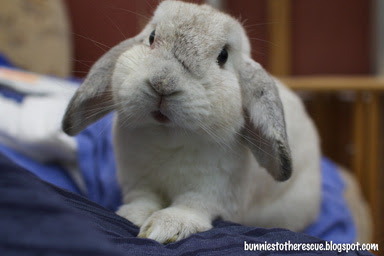 "Look at this face - isn't it a face you can trust? Now shift - I polished off half a bowl of water with breakfast and if you don't move soon you'll be wearing it."
Posted by Bunny-Hugging Volunteer at 13:32