Do you believe in second chances?

Earlier this year we attempted to bond one-eared Neon with our oldest resident, ten year old Tibby. It all seemed to be going like a fairy-tale, with much snogging and hanging out together in the sun, until we realised to our horror that at some tiny moment in time, he had injured her. Nobody saw it and certainly they must have made it up again afterwards, and we can only theorise that perhaps his previous bad bonding history (in which he was injured by two females in a row) made him jumpy and Tibby's over-affectionate advances on him might have been mistaken in the blink of an eye. Unfortunately the subsequent separation while Tibby underwent veterinary treatment and observation broke the bond completely and she refused to take him back.

Since the initial signs had been so promising, we decided to wait until they might just have forgotten about the whole affair and then give it another go, but more slowly and carefully.

So far it seems that while Neon is completely accepting of the idea of Tibby as his wife, she appears to have quite the elephantine memory! Here's hoping we can convince her to forgive him! 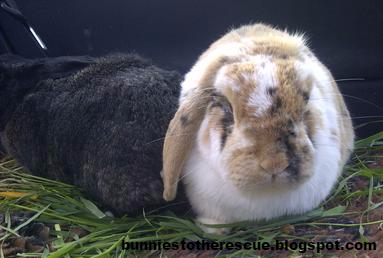 "Funny... I'm the one you were worried about but now SHE'S being mean!"