Once again a few of our rabbits have moved on to pastures new- a couple of Saturdays ago several residents went over to the Warren for a little stay before going to their new homes. 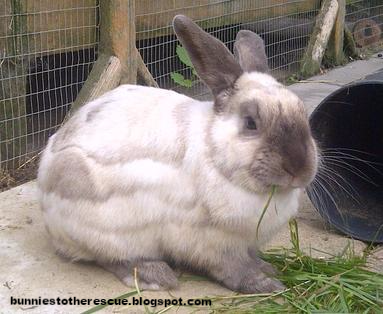 One departure was sweet Mooki, a popular bun who has been obviously sad and lonely since the death of his dental-problem partner Soufflé. We have high hopes that he will find a new love of his life and a home, although from the sounds of things he has already won the hearts of those at the Warren.

One other pair well appreciated at the Rescue were Courtney and Tarzan. Courtney is a big character- always interested, full of energy and headstrong, with Tarzan her more shy husbun. Courtney started her journey here after being found as a stray and it took three attempts to spay her because of difficulties with anaesthesia. Tarzan was one of an accidental litter who, along with his brother Regal, apparently has issues with bedding being INSIDE a house. Recently I closed their playhouse door to prevent this and someone industriously threw it all out of the cat flap instead... I almost hope the Warren has as much fun trying to convince them...

I'm sure you will join me in wishing them all the best, alongside half-blind widower Wilbur; little Indiana who recently lost husbun Sprocket to chronic lung problems; Julie and Fluffster who had been returned to the Rescue; and Quentin and Fantasia, the tidier brother of Tarzan and his fluffy wife. May you soon be binkying in the homes of your dreams!