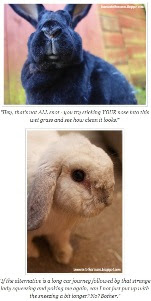 Just thought I'd give you a quick update on Whisky.

The vet trip did not go as I expected. While I was mostly worrying about the building congestion in his nose and what it might mean, his vet was more concerned about what she found in his ear around his abscess. I don't really want to describe it - I'm eating my lunch while I type this. Suffice to say that it was worse than it has ever been before, though with his many periods of anti-biotics for his other problems perhaps it's never stood a chance of expanding much before.

So no anaesthetics and probes yet, instead it is another round of pricey culture tests with a week of ear drops and anti-biotics while we wait for the results (with a touch of Bisolvon to help clear his nose). As I understand it, the short-term plan is to try and beat the ear abscess into submission (or at least back to some stability) with anti-biotics, then if that doesn't do the trick we might have to look at more surgery.

So the only drama for Whisky this week is the speed with which he races in the opposite direction when he sees the ear drops come out of the drawer...

Posted by Bunny-Hugging Volunteer at 13:02