Well here we go, second day of January and we already have our first vet visit of the year.

Whisky was due for a check on his nose, ear and eye problems this month but I've had to get an earlier appointment for him because he started having longer sneezing fits after Christmas and now his nose is starting to sound congested like it's affecting his breathing. I am feeling sick with worry, but also my anxiety levels are rapidly rising because I suspect his vet is going to give me "options". One of these is likely to involve putting him under to have an exploratory poke up his nose with some scopes and probably some more x-rays. I hate the idea of putting him at further risk with yet another anaesthetic, although I guess it has been a few months now since his last one. I've lost count of how many he's had in the last two years and he was no stranger to them before he came to live with me.

Jemima has also been very sneezy over Christmas, though this is not exactly a surprise since she has had recurring low-to-medium level snuffles for as long as I can remember. That said, I am not sure I realised how persistent it was until she moved into the house meaning I have more opportunities to hear the sneezing and see her messy nose. I don't think there have been many days in the last week I haven't found bits of hay stuck to it - that may well be vet visit number two. 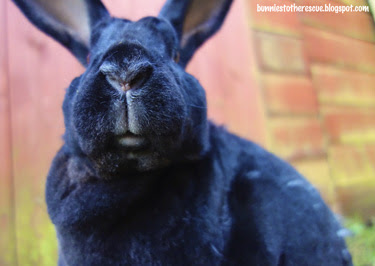 "Hey, that's not ALL snot - you try sticking YOUR nose into this wet grass and see how clean it looks!" 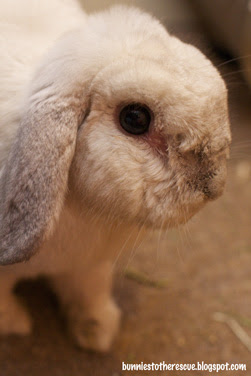 "If the alternative is a long car journey followed by that strange lady squeezing and poking me again, can I not just put up with the sneezing a bit longer? No? Bother."
Posted by Bunny-Hugging Volunteer at 06:30