You may have noticed a disproportionate number of posts and pics on here with a breakfast theme. Because I tend to be the one to open up and feed on the days I am at the Rescue, it is not all that surprising that so many of my bunny photo's have vegetables in them. Recently I have added aviary sweeping to the end of my routine, which I thought would mean lots of veg-free pics of happy bunnies in clean enclosures. It turns out though that most bunnies at the Rescue RESENT me for moving their poo about and disappear as far out the way as they can. As for the ones that don't, they are often found sat on top of the newly made pile picking the good bits of hay out of it. Which doesn't make for a great picture.

But then there's McGee and his little friends who are so un-phased by the broom that you have to be careful not to sweep them up as you work round them. 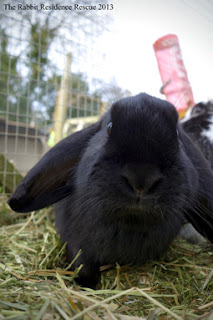 "Yes you missed a bit, but that's OK - this bit is my lunch!"
Posted by Bunny-Hugging Volunteer at 06:30