This last few weeks, following a course of antibiotics, we were battling bottom leakage while we waited for Whisky to start eating enough hay and caecotrophs for his digestion to head back towards normality. Instead it continued to get worse, lots of goo gurgling out from under his tail leaving a trail wherever he went, turning to pools of gooey liquid and soaking his rear anywhere he sat. Needless to say, we were spending quite some time every day trying to keep his fur (and the carpets) clean.

So back to the vets we went and now have a new bottom cleaning and diet regime on top of all the nebulising and nose wiping we are still doing.

Only one day in, but last nights clean-up seemed lighter and had to be paused while an actual, fairly dry, well formed (though a bit small) poo came out. I am hoping this is a good sign. It almost made up for all the tiny fluffy grumpiness I found myself on the wrong end of... 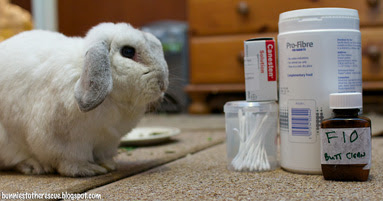 "One is not impressed. One is considering one's response. In the meantime, one of these containers had better have something VERY tasty in it..."
Posted by Bunny-Hugging Volunteer at 06:30