When I went to put the fresh veg into the snackbarrow before breakfast I found not only a small amount veg left over from yesterday, but also a large number of poos. Almost like somebun had spent a fun afternoon just grazing the rest of the veg away.

So todays task: Keep Mr and Mrs Tubby-Fatbottom out of the barrow.

I think I succeeded, but it didn't feel like much of a victory. Probably because, after leaving the barrow unattended for a few minutes to retrieve some special diet snacks for sick bunnies from the other end of the Rescue, I returned to find this: 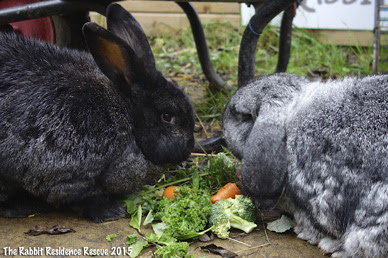 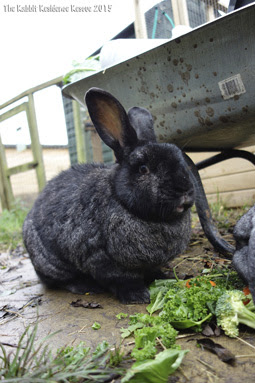 "Erm...we were just helping you clear up this veg that...er...fell out the snackbarrow entirely of its own accord. So, really, you should probably thank us for helping...with some treats?"

Well Boadicea, I would give you some carrot tops, but strangely none of the carrots in the snackbarrow appear to have tops anymore. I guess they fell off the carrots of their own accord too, did they?