This year the RRR has been downsizing, in terms of resident numbers, in an attempt to shift to a more sustainable position. This has necessitated stopping intake and pushing re-homing until the target number of bunnies can be reached.

Regardless of our intake status though, the RRR always welcomes back former residents. We would much rather be slightly inconvenienced by the odd extra mouth to feed than the worry they might move on to an unsuitable home. You hear awful stories of unwanted rabbits being dumped, by guaranteeing from the outset to take the rabbits back if for any reason the owner no longer wants to keep them hopefully also means zero chance of an RRR fluff experiencing this dreadful fate. On the whole though, the people we re-home to are all responsible owners and the rabbits come back when there really is no other choice for the owner but to give them up.

So we have always had bunnies come back to us, but somehow it feels like we've had more former residents come back this summer than we usually would. It may be the economically unstable times we are living in or it may be that this modern age of social media means owners are more likely to remain engaged with the Rescue after adoption and seek help, I suspect it is a bit of both.

Well onto todays post. You might not recognise this lady without the little soon-to-be-jumbo mini buns hanging off the underside of her, but this delightful returning resident is Mindy. She originally came in August 2010 with a litter of cuties, only to give birth to a second litter shortly after. So she is actually the mother of resident Mimi, and former residents Mo, Mohito, Shandy, Google, Badger, Bing, ... and since she came in from our largest rescue case, probably related to many many others.

And the good news is that she was pretty much reserved by the time she arrived, so with luck she will have her own home again very soon! 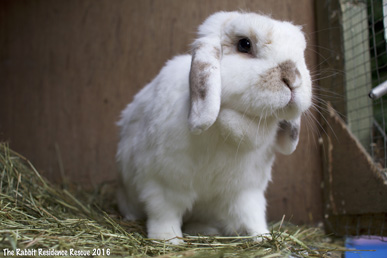 "It's good to see you all again, but can I just clear one thing up? Mimi's not going to be popping round later expecting dinner is she??!!"
Posted by Bunny-Hugging Volunteer at 12:38