Let me start this post by saying the end result of what follows is relatively positive.  Because although I would generally enjoy describing events in such a way as to allow you to follow along with my emotional journey, in this case I'd like to save you the (what for me was several weeks of) sickening dread.

So there I was, the day after having to say goodbye to Jemima, drowning in grief and barely able to function.  Two of my dearest fluffy children lost to tumours in four months.  But having taken the week off work to spend more time with Jemima in her last days, I had the luxury of being able to just shut the world out and not have to worry about trying to exist in it.

I had planned to feed Whisky his breakfast, sort out his water and litter trays then head back to bed to spend the day feeling sorry for myself, but Whisky had clearly decided not to let that happen.  Having on-going problems with his digestion, he had covered the floor and much of his leg fur in very unpleasant looking bottom-discharge.  So, fighting against my reluctance to go anywhere near another vet practise so soon, off we went on the long car journey to see his super-vet.

On the examination table, the vet pushed her fingers deep into Whisky's abdomen searching for signs of physical abnormality and as usual his eyelids did their job of straining to keep his eyeballs from popping out of their sockets in surprise.  And then she said it.

Well for a split second I thought he would out-live me anyway, because I almost died right there.

A second feel and the vet suggested that, although it didn't quite seem in the right place, it could  just be something working through his oddly behaving digestive system.  I suspect she thought this would make me feel more optimistic, but this was pretty much what Elvis' vet had said about his tumour several weeks before it killed him so it really didn't make me feel better at all.  We were sent home with a variety of things to address the digestive issues and the vet demanded to see him in three weeks for a re-check.

Three weeks later, last Wednesday this was, we arrived back at the surgery seemingly no better off.  She felt his tummy again - the lump was definitely still there.  Whether a tumour or something else, this could explain the odd function of his digestion, but it definitely needed quick action.  He was booked in for an ultrasound and possible biopsy Friday, I dropped him off around 0830 and had an appointment to discuss the results at 1840.  It was a long day, but I managed to distract myself by deep-cleaning Whisky's room - despite my daily best efforts of mopping up, the mats and carpets really needed aggressive shampooing by this point. It felt good to have his room sparkling for his return, though it was something which he later greatly disapproved of claiming it "smelled all wrong". Typical.

Well anyway, the results were unexpected - the lump turned out to be not a mass but one of his kidneys which had shifted forwards in his abdomen.  Apart from this odd positioning, there was nothing unusual revealed by the scan. I felt like bursting into song with joy and relief.

So I feel slightly less stressed now than I have the last few weeks, though we are no further forwards in finding out what is disrupting his digestion.  There are a few more things we can try and he is having more tests carried out on his blood this week but in the meantime he is happily bouncing around enjoying life apparently tumour-free.

One puzzling thing for me in all this was that I was repeatedly warned beforehand that he would be dramatically shaved.  This seemed odd because why would I even remotely care what it would make him look like at a time like this??!!  Sure HE might not be too impressed, but for me it was the least of my worries! 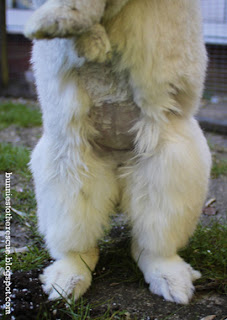 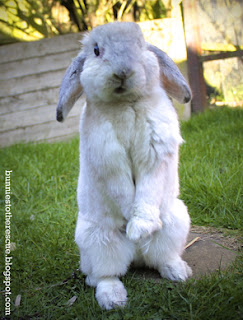