A Random Selection of Updates

First of all, you may have noticed a couple of pics of tiny new babies on here and Facebook. A couple of weeks ago we agreed to take in four girls from another centre. Although we are rammed to the rafters with abandoned bunnies, the other centre was desperate and we actually had a shortage of single girls that week for bereaved boy bunnies coming in looking for partners, so we agreed to take them figuring they'd be re-homed quickly. What we didn't know until they arrived was that they had little families growing inside them fathered by the boy they had been rescued with by the other centre. Giving birth so soon after a stressful journey, one litter sadly didn't stand much of a chance, but the others faired better. So it looks like our intake of four has turned into at least a dozen more. 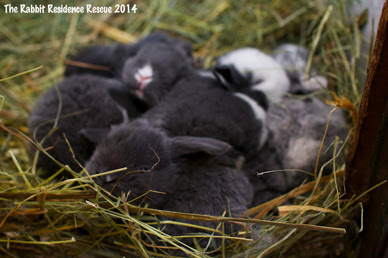 In parallel to this, we are dealing with another large case which has involved co-ordination with several other rescues as there was no way we could have taken all the bunnies ourselves. This has been taking all of Caroline's time especially as many are not in a good way, with rampant snuffles throughout the lot and several in GI stasis. Monday I agreed to cover the Rescue for much of the day and on top of my usual feeding/water/sweeping had to spend much of it cradling one poor tiny soul trying to encourage him to syringe feed.

Back at home, the fosters are doing OK. Last week Anouska somehow managed to rip a claw out and proceeded to cover the upstairs in blood until I could get hold of her and sort it out. Meanwhile, Bobbit has continued to be predictably crazy every time they go outside with higher and higher binkies. Typically, he does his highest and craziest when I am not close enough to photograph them, but I am determined to get a decent one of him for Binky Day this year.

Whisky has had a brief bout of depression, only for about a day, which has fortunately now transitioned into being just plain fed-up with me. The trigger was being put on eyedrops, which he detests, and now oral meds too, having also had a tear duct flush every week for the last three, trying to clear an infection. It's nothing new, it's right where that tooth root grew through his face, but this time the infection is being slightly harder to shift. Flush number three was yesterday and the vet thinks there is improvement, fully expecting it to be cleared within the next week.

Well, that's about it. My ongoing project to move old pictures off my laptop to make space for new ones is turning out to be trickier than I thought - the old ones are much smaller than the new ones, so I've already re-filled the last chunk of space I made! So that's another big job on the "to do" list. But you don't mind if I just post pictures of all the babies and little-uns on here until I can sort that out do you? No? Thought not!

In the meantime, here's my own little grumpus... 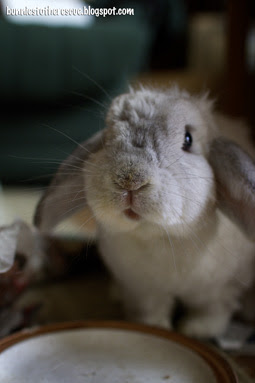 "And this extra stuff going on affects you making my breakfast...how?"
Posted by Bunny-Hugging Volunteer at 06:30