A few years ago I read (or, possibly, dreamt) about a research paper that suggested you shouldn't give kids treats after visits to the hospital, dentist or when bad things happen to them. According to the research (or dream), children who experienced such post-event compensation find it harder to deal with challenges later in life. The theory goes that while they are learning about the world it is better to teach them to accept that it isn't all fun stuff, some parts of life can be painful or annoying, but that's just part of it and it's not really worth making a fuss about. (I still haven't ruled out the dream part - if you are starting to be concerned about the nature and detail of the things I dream about, feel free to imagine that I dreamed the paper being explained to me by an attractive celebrity in her underwear.)

That's humans. I have not seen any studies or advice about equivalent situations with bunnies.

Lacking any scientific evidence either way, I have always felt it reasonable to reward Whisky for being patient about having his face washed, taking medicines and all the other things his various health problems have required me to annoy him with on a daily basis. Part of the problem with this is that he doesn't necessarily associate the snack part with the being good part. At the end of cleaning him up or what have you, I will usually make a little fuss of him to signify it is all done and then give him the treat. But now, he demands a treat after any time I make a fuss of him or stroke his head in any way.

And so to this morning. Because of the damage in his right side nasal passage, any slight bit of dust or anything will set him off sneezing. It also makes him prone to infection in the area, so if it sounds at all like a wet sneeze I will often wipe his nose after by rolling a cotton bud in the end of his nostril to extract any snotty blobby lumps (or at least see if any are present). It only takes two seconds but he hates it, so if he is good and puts up with the wiping he is rewarded with a pellet. Trouble is, now even when it is a slight sneeze, if I am anywhere nearby I get this: 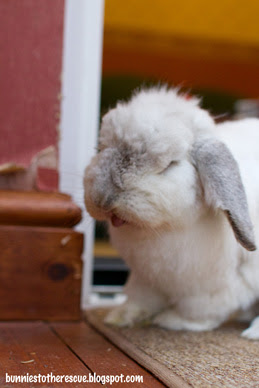 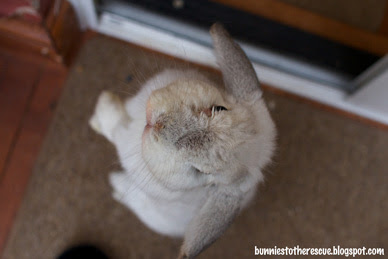 As he has always had trouble keeping weight on I have often just caved to his demands for between-meal treats where with other bunnies I would not, but it seems that something has changed recently and he has started getting wider (sometimes when he sits down, he has an old-bun butt-tyre thing going on). Much to his disappointment, I think we might need to have a treat review - starting with cutting out the sneezy snacks. Sorry Whisky.

Posted by Bunny-Hugging Volunteer at 12:01