Minty has been a bit of a concern lately. Her wild blood makes her very nervous around people, you'd rarely see her out in their aviary let alone at meal times, so having discovered she has dropped some weight it has been very difficult to observe her.

Since having an outdoor grass area to play on occasionally has done wonders for wild-cross head-tilt bunny Thistle, Caroline decided to move Minty and Eccels into a SNU (Special Needs Unit) bordering a grass patch for them to play on. The next problem was - how do you persuade her to come out? We wouldn't let them out unsupervised in case of passing predators, but with people around there was no chance she'd appear. Or so we thought...!

A few days ago I was at the Rescue dishing out breakfast and decided to give them a go. No other volunteers had turned up (everyone is on holiday this week), Caroline was at the top of the Rescue seeing to a new arrival, so it seemed the perfect time. I fed all the bunnies in that section and left their door open. A few minutes later after I had chopped some more veg, I peered over the hutches bordering the grass and there she was - hopping about, sniffing, investigating, digging, basically acting just like any other bunny making the most of her playtime! Occasionally she'd return to their SNU for a few moments, as any bunny would tend to do, checking they can rush home without any obstacles in case of emergency. But yes, result, happy bunny!

And oh, so beautiful! I've only ever seen her crouched under hutches or in hay with her ears flat trying to look small, seeing her at full stretch with her ears up was a real sight to see! Of course I tried to get some photographs, but that was a bit much for her. This one I thought was going to be good... 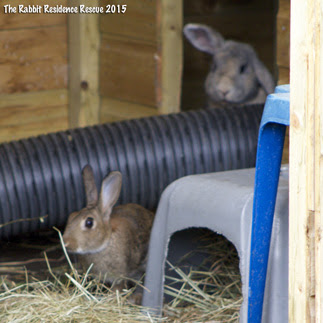 ...but (a) she clearly spotted me and wasn't looking so relaxed and (b) in my hurry to get it before she ran off the autofocus locked onto the door frame and she went out of focus. Ho hum. Well seeing her out made my day and hopefully if we have some more Minty playtimes I will eventually get a good photo!

Have a good Thursday everyone and everybun!