As many volunteers will know, some of the rabbits at the rescue have a greater link to me than others- four of the residents, Beyonce, Kylie, Christina and Cindy, are in fact my 'granddaughters'.

I adopted their father, a little black and white Netherland Dwarf called Oren (RRR name Mr Jinx) in 2008 when his twelve children were only babies, just a couple of months old but the same size as their father due to the interesting choice of mother- Amelia was a large breed with a lithe frame, absolutely nothing like her partner at all.

Both parents have since passed away (coincidentally within a week of each other) but their legacy lives on. I find the result of the crossbreeding to be vaguely entertaining... what do we call them, Netherland Giants? It's clear to see that they get their larger size and, in the case of the trio, dark colour from their mummy but not one actually looks like her whatsoever. I see Oren in them far more because alongside the shorter ears, every single one of them is round and fat like their daddy. 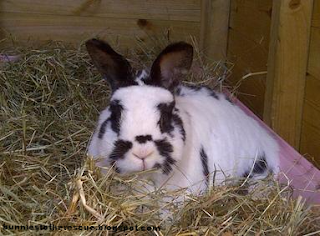 "Hey, did you hear what she just called me?! Are you going to let her get away with that?!" 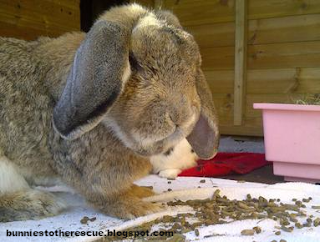 "Hey, be careful how you talk to my lady! Now, if you don't mind, I'll just hoover up this lot so she doesn't get any fatter."