I am wondering if I have the only rabbit that eats with his paws.

Because he struggles so hard to pick up food with his mouf (no front teeth, front part of his jaw wasted away, nerves in one side of his face a bit screwy, snotty nose making breathing and eating at the same time tricky) he rolls it across the plate/floor with his face and then up off one of his paws. Sure, it's not like he picks the food up with both paws and puts it into his mouf, not yet anyway, but it is an odd way for a rabbit to eat.

The downside of this of course - extra mucky paws. Which someone has to help him keep clean.

So while the rest of you are probably out playing basketball or whatever with your bunnies, that's what we are doing this evening. After the nose and bottom wiping, we are bathing little paws. Aren't we, my little boy? 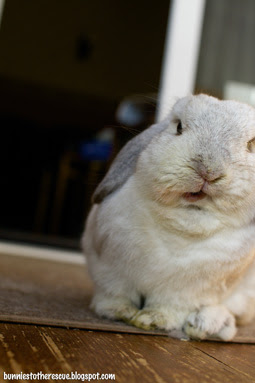 "Bath night? But I've got...er...noseball practise! Yes, that's it! So I can't. And don't wait up. The whole team is going for carrotinis after."

Posted by Bunny-Hugging Volunteer at 19:57