The RRR volunteers have an online discussion area which is used for disseminating operational information. It is mostly filled with such exciting discussions as:- what needs cleaning tomorrow, how much veg was left after todays breakfast and, more importantly, how much veg is likely to be left for tomorrow after it has been subjected to 'Archimedes tax'.

Occasionally some of the discussions spin off into what funny antics the bunnies have been up to and the like. One such discussion recently started, as some do, "I know we are not supposed to have favourites but...". What quickly became apparent is that there was one particular pair that around half the regular volunteer team had all fallen in love with and wanted to take home. And I will admit, I was one of those people.

But fortunately, for the harmony at home with our own bunnies and long-suffering partners anyway, I am happy to say the temptation to give in to those feelings has been removed. Because the wonderful Dappy and Little Snow have found their forever home as pampered house bunnies! Good luck in your new home guys and make sure to tell your new humans that we are all jealous! 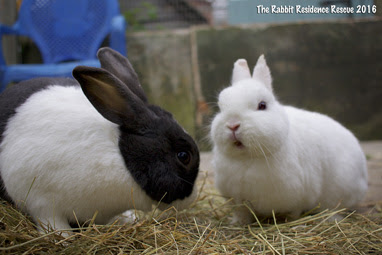 "Aww, really? We were that popular? You should have told us, we would have conned some extra portions of grated carrot out of you lot if we'd known!"
Posted by Bunny-Hugging Volunteer at 06:30