There are various rabbits at the rescue who have revised diets, from Bailey B who is not allowed sugary carrots, to Angel who isn't allowed vegetables at all, to Romeo who is practically not allowed anything in case it makes him seriously unwell.

One rabbit who has reluctantly been forced into a new morning nibble arrangement is Mutley, who has had to endure several expensive bladder procedures for accumulating sludge. Not only is he now receiving low calcium bottled water but there is a list of low calcium vegetables that he is allowed to eat. The downside of this is that most of those vegetables are received with some disdain. 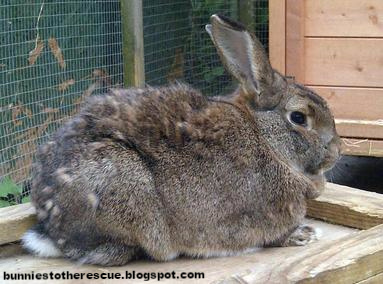 "I'll get off my box and start eating my breakfast when you go back to that wheelbarrow and get something that I consider proper breakfast!"