I was technically on holiday this last week, which mostly involved finishing off lots of little jobs in the house and garden. It also involved a trip to Brighton, though due to the constant threat of the incoming storm I didn't see much of Brighton itself.

By a small coincidence, I suddenly realised I had been in Brighton exactly four years previously. So what had started out as a pleasant trip to visit friends became for a brief moment a time of sadness, a time to reflect on the little fluffy boy I lost on returning from a similar trip in 2010. My dearest Santa, who I came home to find unwell on 8th August that year and passed away two days later. He was my first fluffy boy and the first bunny I ever lost.

As always, I will think of him on this day, the anniversary of his passing, and as always I will miss him terribly. 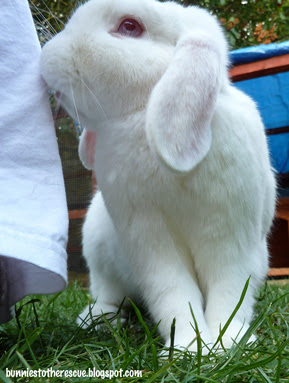 Posted by Bunny-Hugging Volunteer at 15:15