It has not been a good week for photo's. My one day at the Rescue was such a short one that my camera didn't even come out of its case.

Meanwhile, foster bunny Bobbit was unwell so spent several days at the vets being poked and scanned, with Anouska along for company. Since being back at home he is getting forced to swallow medicine three times a day - consequently, if I go near them with anything except food (and sometimes even then) they both run in the opposite direction.

I don't know if it is the suddenly colder weather, but today Whisky is sleeping out of sight in his kennel, preventing any opportunity for nap pics. (Or maybe that's WHY he was sleeping in his kennel...) And then after giving him a vigorous tail/bottom/tummy clean earlier (I think he'd accidentally napped on an uneaten caecal blob - it was not pretty), he's avoiding me now anyway so there's no chance of a waking pic of him either.

Well there are my excuses. And here's a random pic of Whisky from this time last year. 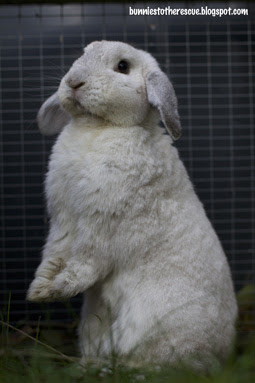 Posted by Bunny-Hugging Volunteer at 19:08