There once was a woman who had some rabbits. Then in July of 2007, following a number of altercations with her landlord and the police over the state of her garden and all the animals she kept there, that woman decided she'd had enough of those rabbits. As things were, she'd long given up caring for them, they were probably only still alive because one of the neighbours had taken pity and started putting food and clean water in their tiny hutches. Not wanting them anymore she decided to bundle them all up and take them down to the nearest vet to be put to sleep.

That could have been the end of the story for these poor neglected creatures, but as luck would have it the lady had walked into our vets. So the vet presented her with a better, cheaper option which the owner duly accepted - she promptly signed all the rabbits over to us. And that is the abridged version of how a small group of the most adorable bunnies, a group including my very own Santa Claus and Whisky's partner Megan, came to be at the Rabbit Residence Rescue. 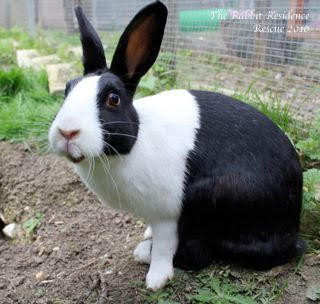 Megan was soon to be the friendliest and happiest bunny you could ever hope to meet, but when she arrived she was in a complete state. Half her ideal body weight, crooked teeth growing right out of her mouth, dirty and generally unwell, she was completely shell-shocked. As a result she spent the first 6 months staying at home with Caroline being carefully nursed back to full health.

Once she was strong enough she was bonded with newly arrived resident Whisky, another dear little soul onto whom life had dumped a whole heap of challenges. When I first saw them together I must admit I thought them an odd mismatch, but it soon became apparent that they were yin and yang, a perfect whole, completing each other. They were always snuggling together, cleaning each other and enjoying scoffing their grated veg side by side (already by this point neither had any front teeth remaining). 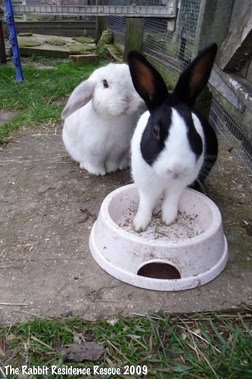 Megan not only adored Whisky, she was also super-protective of him. While it is common for a doe to defend her territory and warn off another encroaching doe from her buck, Megan would take to this task way beyond any practical sense. She could regularly be seen head-butting Whisky away from the mesh fence before proceeding to aggressively warn off the neighbours with glares and boxing her paws at them across the mesh - even with our giants over three times her tiny 1.9kg size. And I'll never forget the time another little bunny, just a few months old, scrabbled under the fence into their warren - Megan chased her round and round and round for half the afternoon, the little girl thought it was a great game until eventually two of our volunteers managed to catch the baby and put her back with her siblings. 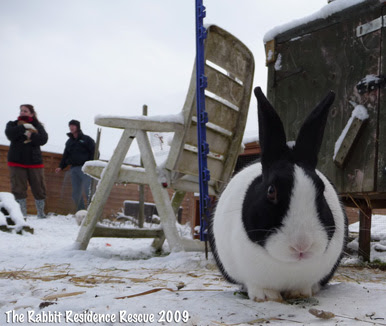 When I started at the Rescue in 2008, looking for a pair of rabbits and trying out volunteering "for a few weeks to make sure I really wanted rabbits", I had met and fallen in love with Whisky on the first day. Around that time, my then girlfriend Helen would often come along to volunteer as well and she fell instantly in love with Megan. So together they could have been an ideal choice for our first rabbits, but being new to it all we felt we didn't have the experience to take on their special-needs and chose another pair instead. We adored our bunnies at home, they were the best bunnies in the world, but whenever we were at the Rescue we would spend our breaks with Megan and Whisky and were almost as attached to them as well! 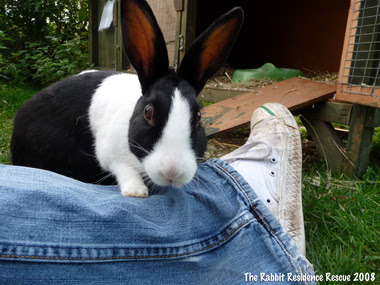 From early on in my volunteering I was taking photographs of all the bunnies here, largely to promote the Rescue and use on RabbitRehome, the website, Facebook and this blog. I haven't counted, but I'm pretty sure that in the period she was at the Rescue I have more pictures with Megan in than any other bunny. And that's not as much a result of favouritism as it is that she was so friendly and easy to take perfect shots of. Plus, she'd photobomb at every opportunity! Here is a typical example, where I was trying to get a picture of Sprite: 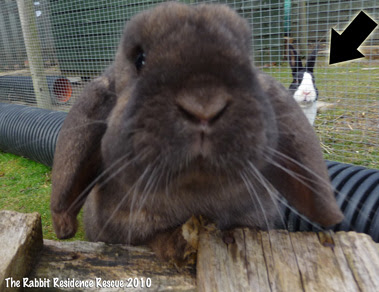 When the Rescue was short of space in 2009, Caroline asked me to foster Megan and Whisky for the summer so of course I quickly agreed. Despite it being Whisky that made the request impossible to refuse, within a few days of being in the house it was Megan's unbounded sweetness that was putting a big smile on my face every day. Whereas Whisky would head-butt me and scrabble at my legs if he wanted something, Megan would gently place her paws on me and look hopefully into my eyes to tell me she wanted a snack or extra playtime in the garden. It tore me up that I had to take them back to the Rescue at the end of the summer, but at that time I was not in a position to take on a second pair of rabbits long term, especially as Jemima was tiring of the timeshare situation with the lawn and Santa was demanding his access to the lounge back! 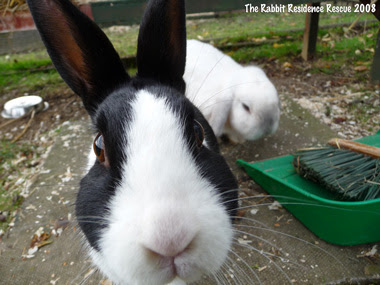 Back when I adopted Santa and Jemima I had always intended them to move in and be house rabbits if ever my housemate moved out. Sadly Santa never got to be a house rabbit, passing away just a month before that happened. Jemima's new partner Elvis was definitely happier as a garden rabbit, which left the newly vacated bedroom available for Megan and Whisky. However, as usual Caroline managed to con me into taking some emergency fosters first, so Megan and Whisky had to wait until Xmas eve 2010 before they could move in to their new home!

To say I was pleased to finally have my little angel and her crazy loppy husbun become a proper part of my family is a massive understatement. I was sooooooo exited! I didn't have much of a chance to enjoy their arrival though. I had planned to be at my sisters from Xmas eve to Boxing day and Caroline was going to be staying in my house looking after my bunnies in the mornings and evenings when not at the Rescue. To further complicate matters, Caroline brought two holiday boarders with her, Alfie and former RRR bun Cherish (also a former foster bun of mine, now renamed Lola by her new mum). This meant that rather than Megan and Whisky having the run of their nice big room on arrival, we had to divide it up and both pairs of buns had to be contained in relatively small pens.

I figured the setup wasn't ideal, but they would cope for a couple of days. However, owing to a miscommunication between Caroline and myself, it turned out I had unknowingly agreed to the boarders staying for 2 weeks. I felt guilty about Alfie and Lola remaining in such a small space for that long, but they didn't seem to mind. However, during those weeks Megan and Whisky seemed at times uneasy and at others almost depressed, a stark contrast from how they were at the Rescue. Of course I couldn't tell if it was being in the small space, being in an unknown environment or being in close proximity to strange rabbits, but I suspected it was a combination of all three. Whisky would perk up a little at mealtimes but even then, by the end of the first week Megan would only pick at food. A visit to the vets confirmed she needed a dental to have some spurs filed down, but she had to wait for a few days before they could fit her in. Two days before Megan's appointment the boarders went home, a day later I'd finished cleaning and rearranging everything so Megan and Whisky finally had the whole of their nice big room to themselves.

On the morning of 8th January 2011, I dropped Megan back at that same vets that had saved her life three and a half years earlier. I remember being anxious when I arrived, as I always am when I leave one of my fur-kids at the vets. I remember it being early and being the only person in the waiting room. I remember the nurse had the radio on behind the counter and worrying that Megan wouldn't like the strange noise as I signed her consent form and left her. I remember sitting back in the car for a minute fighting back tears, I was so anxious, and telling myself not to be so stupid.

Back at home after a day volunteering I was standing in the bathroom having just brushed my teeth when my mobile phone rang. It was the head vet. Megan had stopped breathing under the anaesthetic and they couldn't bring her back. She was dead. I sat down on the bathroom floor and just cried.

It's taken me four years to be able to write this post about her. Remembering her today has been equal parts joy and pain, she was such a special soul whose life ended so sadly and pointlessly. She meant so much to me, to Caroline and of course Whisky. I miss her every day.

Goodbye Megan. You will always be my sweet, sweet little angel. 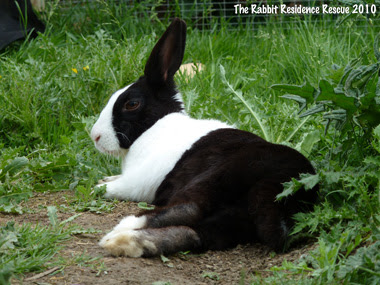