Quite some time ago we noticed Pea had a slightly snotty nose. Except of course we didn't know it was Pea at the time, since we have still not persuaded them to wear little hats with their names on.

Well anyway, being one of the hand-reared "wild" bunch, Caroline was reluctant to put her through the trauma of trips to the vets and having antibiotics. Much as they have grown up into happy domesticated rabbits who enjoy the luxuries of being waited on by humans, that all goes away the moment you try and pick one of them up for health checks. They'll happily hang out with you on the grass doing their thing while you eat lunch, they'll come right up and take food out of your hands if you have any they like, but come health check day they will run up the walls as if their tails were on fire to get away from those very same hands.

Unfortunately, the snot got worse and became so significant you could hear her breathing from the next enclosure over. We clearly couldn't leave it, but catching and medicating her daily while they were living in their fancy Runaround enclosure wasn't going to work. So a little over a week ago, we bit the bullet and moved them into one of our SNUs. It means slightly less space when they are shut in, but unlike their previous house the whole thing is under a roof so they can still use it all in bad weather and of course they are now much easier to catch without causing them stress. Their new house also has slightly more adjoining outdoor space for playtime, although they do have to time-share that space with a few of our permanent pairs.

They were understandably miffed when we first moved them, but looking at them now I'm pretty sure they are over it... 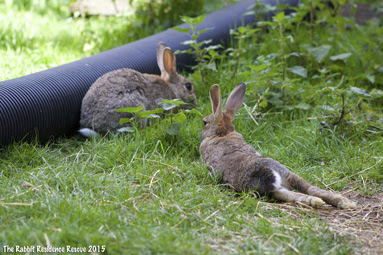