At the Rescue we occasionally come across other forms of wildlife, including various birds such as the notorious robins, one cheeky little thief of a blackbird, red kites overhead and a mob of wrens (one of whom had to be rescued yesterday after managing to get into an aviary and not being smart enough to get back out again). One thing I was not expecting to find inside our fences was this little guy. 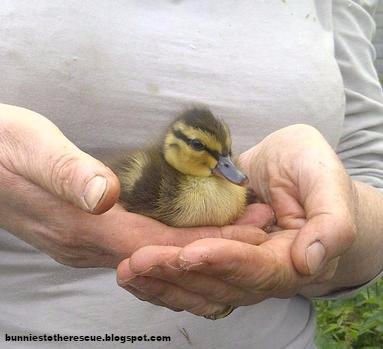 None of us had heard or seen a duck at the Rescue at all, much less that day. With no sign of mama duck and no idea about how he would even have got on site, we could only ponder if he'd been dropped by a larger bird.

One of our volunteers took him to a wildlife centre where he was put with another group of ducklings so he's now going to be well cared for with lots of friends!