We've had our sad losses lately, but it hasn't all been bad. Following on from the death of Cuba, her poor husbun Mallow became quiet and sad alone, like he'd lost a part of himself. A date was set up and it was practically love at first sight, with one lick apparently turning his eligible widow to mush and causing her to worship every little bit of him. Her grooming became so extensive that one time I witnessed him attempting to wash his front paws while she meaningfully washed them with him.

Ladies and Gentlemen (and buns), the new Mrs Mallow. 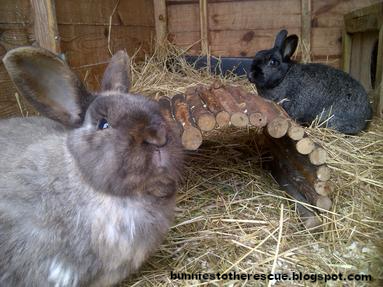 "I got myself a new lady within a couple of hours and she snogs me all the time! Beat that!"