I had a very long and tiring Friday. So long in fact that it's taken me until now to post about it.

In the morning something didn't seem right with the foster boys. They weren't squabbling or anything around breakfast, but there was an underlying air that something had changed in their relationships. Just as I was about to leave them, I noticed Boz had a small bald spot on his face with a scratch. Everything seemed otherwise OK, but I resolved to check on them as soon as I got home after work.

A few hours later, I was at work enjoying a delicious hit of caffeine when all the subtle and not-so-subtle clues of the morning came rushing back and punched me in the brain. I called Caroline to warn her I might need to bring them back quickly and skipped out of work as early as I could.

I was right. Stupidly, stupidly right, and I can't believe I wasn't quicker to put the pieces together. Back at home, I discovered that during the day Boz was being forcibly kicked out of the little group and was fighting his ground, especially with JJ. The two of them were covered in little cuts, there was fur all over the run and worse still, somebun had taken a chunk out of the base of Boz's beautiful little ear. I could have cried.

So the rest of the evening was filled with a trip to the vets with three of the brothers, a trip to the Rescue to pick up some cages (Caroline had a similarly sudden breakup with one of the groups at the Rescue using up all the conceivable space so I couldn't leave them there), then a couple of hours setting everything up back at home. Three brothers in my lounge now stuck in individual cages for the next few days until some holiday boarders go home and they can return to the Rescue.

They are none too impressed with their new housing arrangements, not surprisingly, and poor Browncloud is all lonely in the big shed and run on his own, but at least there will be no more violence and injuries. Whisky, it has to be said, is also not impressed by the situation what with all the cages in the lounge, especially as it means losing his late evening sessions chilling with his dad in front of the TV.

Meanwhile, the sisters are still trundling along in their room OK, though we did have one little incident last night - it seems Picante is quite the little adventurer and I found her high up on a bookshelf when I went to check on them, having used the space left where the pet carriers had been before the vet trip to get a step up. So instead of bloody ears and faces, let's have a picture of her cute little face for today shall we? 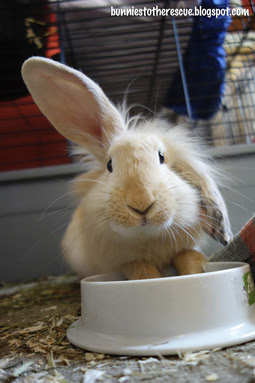 "Well if my brothers have been naughty, surely it would teach them a wonderful lesson if you gave their snacks to me instead?"
Posted by Bunny-Hugging Volunteer at 06:30