Quite by accident, because we happened to get good mouf and tail shots at the right time, we've had three days of Whisky, so why not go for a week?!

We had another visit to the vets yesterday, just for a check-up. Whisky wasn't impressed, refused to go in the carrier when we went to leave the house, probably thought I was planning on leaving him there again. When we got to the vets we were 30 minutes early due to unusually good traffic but there was a tortoise emergency in progress, so we had to wait a long time. The appointment went well though. Although Whisky had a bad week, he had woken up yesterday feeling a bit better and bounced straight back into his normal morning routine of adventuring about the house. Some of the snotty breathing noise had gone, the vet said his lungs sounded OK and his weight loss seems to have levelled out. We are keeping him on the antibiotics for the next week to see how he goes and then take things from there. So that's where we are at now.

Actually, this 'Week of Whisky' works out well, timing-wise, since heavy rain has stopped me taking new Rescue photo's the last few days I was on site. Of course, all this rain means the Whisky pics are likely to be indoors this week:- we've had yawns and naps, which leaves us with...snacks? 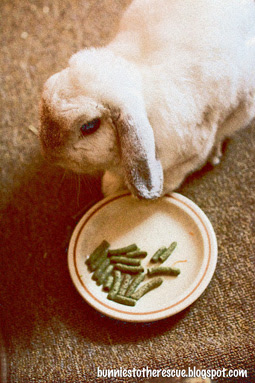 "Call this food? Sure it's tasty, but where's the garnish and side salad? They're the best bits!"
Posted by Bunny-Hugging Volunteer at 06:30