Our dear little Cabbage is poorly at the moment. He has had breathing problems for some time, but recently he has dropped a lot of weight and needs a dental. We were quite surprised when the vet told us this, he has been a keen gobbler of snacks of late, but there were no other problems found in his checkup so we are hoping it's just tooth spurs making him eat less. The big anxiety is the thought of an underweight rabbit with breathing problems going under anaesthetic, so please send him lots of positive vibes for his appointment on Monday!

Usually a bunny who does his own thing, I think all the unusual attention he has been getting over this might already be a bit much for him - as you can see, he doesn't look too impressed with us right now! 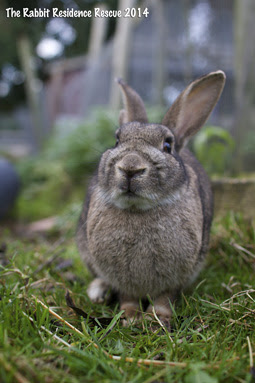 "[harumph]"
Posted by Bunny-Hugging Volunteer at 16:16